Troubled Memories of the Holocaust 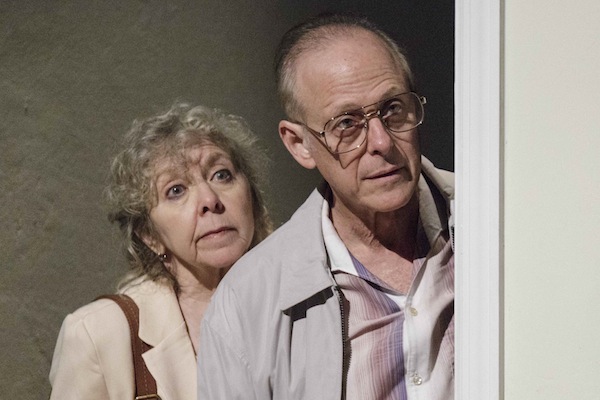 The Model Apartment, a revival of Donald Margulies's 1995 Holocaust play, takes the audience down a loud, tangled and very bumpy road. It is a very good idea for a play about World War II Jewish victims of the Nazi regime and is always headed in the right direction, but the work just does not get to where Margulies wants it to go.

The premise is simple. Two elderly Jewish New Yorkers flee the cold and snow of the city and relocate to sunny Florida, where they purchase a condo. The condo is not ready yet, though, so they have to spend a few nights in the condo complex’ model apartment. Suddenly, without warning, their mentally ill daughter Deborah, in her thirties, arrives, yelling at the top of her lungs, waving her arms and whirling about the tiny apartment in a circle.

Then the play shifts to memories of the Holocaust. The wife, Lola, who spent time in Bergen-Belsen concentration camp as a child, tells everyone, once again, that in the camp she befriended Anne Frank, whose posthumous diary made her world famous. Lola says that Anne wrote a second diary, with Lola as its central character, but it was lost. She drones on and on about her deep friendship with Frank, but Deborah insists that the story is made up and that it gets more heroic as the years go by.

Her husband Max hid in the woods with hundreds of others throughout the latter stages of the war and emerged when the allies marched into his region in the spring of 1945. He was the father of a sweet young child who died. The mentally unstable Deborah was his second child, with Lola.

Lola and Max drift in and out of battles with their daughter and memories of World War II. You feel like the playwright took the Holocaust theme and just shoved it onto his Florida play, sort of like scooping up ice cream and pushing it into a cone. The Holocaust stories are vivid tales of a horrible era in world history, but don’t carry the play forward and shed little light on the characters.

The end of the play is satisfying, far better than the rest of it. The parents realize that they just can’t handle their troubled daughter any longer. Max wants to have nothing to do with her as an ambulance once again carries her away. Lola wants to help her. The torment of parents with mentally disabled children always makes high drama. I just wish there was more of that in the play.

Margulies should have spent more time on the oppression of the Jews. Here he has two survivors of the era and he does little with them and their stories. What was Bergen-Belsen like? The woods? Did they think they would survive? What were their relationships to the Nazis? Did they know people who perished there? Too many historical questions are left unanswered.

Director Evan Cabnet did what he could with the play. He received good performances from Kathryn Grody as Lola, Mark Blum as Max and Hubert Point Du Jour as Deborah’s boyfriend Neil. Diana Davis was a tangle of tension and, every minute she was on stage, just sensational as the daughter Deborah.

There are numerous plays, films and books about the despicable treatment of the Jews. There always will be. It was a nightmare and the more often we see works about it the more often we are reminded never to let it happen again and, as the years go by, tell future generations of its horror.