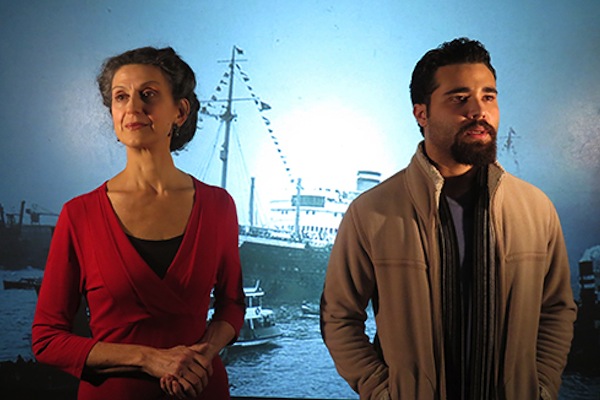 In 1939, the ocean liner S.S. St. Louis left Europe bound for Havana, Cuba, carrying 937 Jewish refugees from Hitler’s Germany.  Their departure from Hamburg followed several years of flight by thousands of other Jews.

The Cubans, caught in the middle of international politics, passed a new immigration law that barred everyone except Americans from entering their country. The Cubans refused to let the Jews land. The ship then headed to Miami, but United States officials also refused to let them in, citing the 1924 immigration law that restricted immigrants. There was a third, unsuccessful, effort to land in Canada. The St. Louis then went back to Europe, where several countries reluctantly took in the Jews. Historians estimate that about a quarter of the Jews on board later died in Nazi concentration camps after their new countries were overrun by the Nazis.

Sotto Voce, the new play by Pulitzer Prize winner Nilo Cruz about the voyage, seems like a passenger ship that missed the boat.

The subject of the drama is a sad, provocative and enticing piece of history (the 1974 film about the incident, Voyage of the Damned. was wonderful). The barring of the Jews on the St. Louis from Cuba, the U.S. and Canada was simply inexcusable. It was a loud signal to the world that all three countries would prefer to knuckle under to the powerful Fuehrer than recognize the rights of a small group of Jews. The story cries out for any number of theatrical treatments, personal and political.

Sotto Voce is a play in which a young Cuban writer in 2000, Saquiel, falls in love with the ‘virtual image’ of an aging German writer, Bernadette, who was in love with Ariel Strauss, a passenger on the ship. The young Cuban, with help from Bernadette’s servant, tries to get her to open up about the voyage (she was not on the boat, but saw her love off at the dock and knew all about the voyage). She will not co-operate and will not meet the writer. They call each other on the phone and take virtual ‘trips’ through town together, but never sit down to discuss the voyage of so long ago.

The last ten minutes of act one and first twenty minutes or so of act two, if stitched together, would have been a taut one act play. Cruz’s problem is that he gives the audience 45 minutes of incredibly dull dialogue and plot before he jumps into the story of the ship at the end of act one. After twenty minutes in act two, he drags the rest of the story out to nearly two hours, without adding much to the tale.

Worse, Cruz is a Cuban whose father was put in jail by Fidel Castro for two years and then escaped the country with his family. As a Cuban, he should have explained more about the story. You learn next to nothing about the sordid tale of persecution. Cruz tells you that the ship was turned away at three ports and that he thinks that the Nazis were being the turndown, and that’s it. He had 937 stories to tell on stage and failed to relate any of them.

The Jews’ problem on the S.S. St. Louis was that no one knew the Cubans had suddenly changed their immigration law that barred them from landing. They spent six days anchored in the harbor at Havana trying to negotiate safe passage, raise money and even (rumor had it) bribe Cuban officials. But, in the end, only 22 non-Jews on the ship, with Cuban visas, were allowed to land. The ship then left. Its Captain, Gustav Schroder, sympathetic to the plight of the Jews, considered grounding the St. Louis near Florida so that the U.S. would have to take the Jews in, and then, later, to ground her off the coast of England. He backed off both strategies at the last minute. Large groups of Jewish sympathizers in the U.S. and Canada lobbied to take them in, putting pressure on officials, including President Roosevelt, but were ultimately turned down by all three governments. These efforts involved complicated intrigue by all. The troubles of the St. Louis received much press attention.

Cruz’ contemporary telling of the St. Louis tale of a ‘virtual romance’ is hard to believe unless you are related to pro football player Manti Te’o, who swore he was in love with a woman he never met, too. Remember him? Here, writer Saquiel and novelist Bernadette never meet yet fall deeply in love. Huh? He also falls in love with her maid, Lucila, whom he does meet, and who loves him.

Cruz directed the play. He gets good performances by Franca Barchiesi as Bernadette, Arielle Jacobs as Lucila and Andhy Mendez as Saquiel, but they all need life preservers to get through the script.

Sotto Voce could have been a good hard look at the perils of the St. Louis, or Nazi Germany, 1939 international politics, or the Jewish refugees, but instead it is a story about a passenger ship that is taking on too much water.