Face to Face with Macbeth, Odysseus and John Wilkes Booth in the Bold New World of Immersive Theater 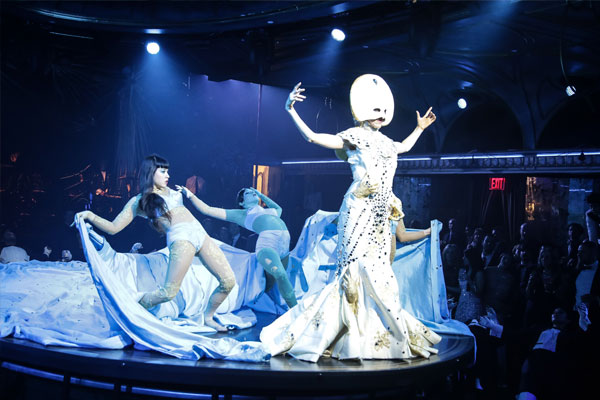 Tony and Tina were married again last week in New York and the guests thoroughly enjoyed the wedding, the reception and all the battles between the relatives as they had dinner and drinks with the characters. Tony and Tina’s Wedding, that first debuted in 1983 and ran for twenty years, has re-opened as part of a new wave of entertainment soaked in history – immersive theater.

Immersive theater is just that. You immerse yourself in the play. Actors come up to you and engage you in conversation. They give you gossip, background and stories about the show and its characters, often belittling others in the play. You follow the character from room to room and listen to what they say and observe short scenes. You can trudge around an island in San Francisco Bay to watch a six hour interactive production of Homer’s ancient Odyssey. You can confront 1800s killers on a street corner in the middle of their crime or attend a boozy 1919 Prohibition party. Over the course of two or three hours, you see an entire play, in snippets, meet a half dozen or so very emotional characters and have a good time. It is a brand new style of theater and it is working.

Tony and Tina’s Wedding is just one of a dozen immersive shows around the country. The most recent to open was Speakeasy Dollhouse, the story of John Wilkes and Edwin Booth told at a 1919 Prohibition party in Booth’s old mansion in New York. The producers of Natasha, Pierre and the Great Comet of 1812 went back two hundred years to stage a story about characters in Leo Tolstoy’s War and Peace and let the play flow through a nightclub setting, with scenes taking place throughout the audience. Sleep No More, still going strong after three years, was set in a refurbished old hotel and showed numerous scenes from Macbeth and let ticket holders wander from room to room to watch scenes played out. The Queen of Hearts, set in Billy Rose’s old nightclub in midtown Manhattan, is a wild party that theatergoers are invited to and participate in, based loosely on Mozart’s 1791 The Magic Flute. The Totally Tubular Time Machine was a similar party set in the 1980s, in which characters welcome you and fell into conversations with you as you went to a show. Drunken Shakespeare is a party/show set in a bar in which theatergoers serve as fellow travelers with the actors – beer for beer. The Live In Theater producers stage their immersive theater plays outdoors. Ticketholders, in small group, walk through the streets of New York to meet various actors who give them information on a 1875 murder that they must solve. In Here lies Love, about Imelda Marcos, theatergoers can get up and dance in scenes from the show.

The history plays work better than the others because there is the time travelling aspect that the others do not have. I went to Speakeasy Dollhouse and, during the night, found myself face to face with John Wilkes Booth. People wind up dancing the night away at the Queen of Hearts and are pulled into scenes by performers. The world is full of fans of War and Peace and they delighted in Natasha and Pierre, time tripping back to an elegant Russia. The Live In Theater shows are all historic. The latest is the Lombardy Case, in which theatergoers solve a 1975 murder.

The plays tell their history very well, too. In Here Lies Love, the story of the Marcoses, the action takes place in a theater surrounded by screens on which are projected news footage, along with theater footage, of the Marcos reign and all of it problems, plus huge front pages headlines about their fall. Members of the audience mill around the open theater as scenes from the play take place on platforms just above them. At times they line dance, form crowds for parades and speeches and, at the end, best of all, get to dance with Imelda Marcos as she saunters through the theater singing and dancing with all. Immersive theater is not only thriving in New York, either. Just last week, the theater at Stanford University, in Palo Alto, California, did a production of ‘Les Miserables’ and had its actors, in full costume, drift through the lobby prior to the show to tell audience members tidbits of information about the plot to get them ready for the musical. Two companies named Dog and Pony stage immersive theater in Chicago and Washington, D.C. The prestigious American Repertory Theater, in Cambridge, has staged The Donkey Show, an interactive play. The We Company in San Francisco, produces the six hour island epic Odyssey, set in ancient Greece, that takes place on an island in San Francisco bay. Pittsburgh has the Bricolage immersive theater group, Punchdrunk stages immersive plays in London, The La Jolla Playhouse, in San Diego, will host an immersive play, Without Walls, in October.

It is not easy to stage immersive theater. Normal plays just require a theater and 500 or so seats. Immersive works need large homes, pubic halls or spacious restaurants. Outdoor walk around plays need a neighborhood where characters can wait for theatergoers; these shows are also vulnerable to rain and snow. The number of people in the ensembles are much larger than standard stage shows (no one man shows here). The play has to be staged in a number of rooms and often has to move from one area of a mansion to another. Lighting is always a problem, as is sound. The producers also have to accomplish two goals – stage a fine play and also provide an evening of unique entertainment.

It is not simple.

History plays work well in old homes; the aged backdrop to a mansion fits in with the storylines of most history plays. History sagas tend to be more complex and often use a number of sets and players, so the rooms in mansions work well. History plays are about unusual events, such as Prohibition or great unsolved murder from the past, so the large halls are helpful. Here Lies Love, as an example, uses a 1970s night club like room in the Public Theater to stage its shows as a disco style musical.

Producers are doing more of these shows in order to make their shows unique and attract new and bigger audiences. The recession is one reason for that. People like to be entertained in new ways (look at all of the reality TV shows) and get better ticket prices (Speakeasy Dollhouse tickets were $75 vs. $110 plus for Broadway tickets). Going to the theater is traditional; immersive theater is not. You can’t talk in a theater, but you are urged to do so in immersive plays.

Perhaps the biggest reason is that immersive theater is a good way to get younger people interested in theater because they seek new thrills. When I went to Speakeasy Dollhouse, the overwhelming majority of people there were under 35.

Finally, best of all, these new and different plays are just a lot of fun.