It's Mainly Skipped Over in the History Books because MLK Failed There. But It Shouldn't Be.

Lee Formwalt, former executive director of the Organization of American Historians (1999-2009) and the Albany Civil Rights Institute (2009-2011), is the author of “Looking Back, Moving Forward: The Southwest Georgia Freedom Struggle, 1814-2014,” published last month by the Albany Civil Rights Institute and the Georgia Humanities Council. Copies can be ordered by sending a check for $22 to ACRI, P.O. Box 6036, Albany, GA 31706. Proceeds from sales help ACRI continue to tell the story of the southwest Georgia freedom struggle. 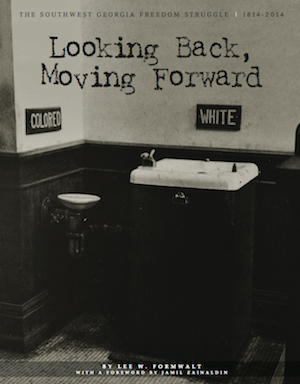 For many people with a knowledge of the civil rights movement the term “Albany Movement” connotes failure. When I moved to Albany, Georgia, 37 years ago, I was a young newly-minted Ph.D. in early American history, grateful to land a temporary one-year position at Albany State College. Before I applied for the job, I had never heard of Albany, and did not know ASC was a historically black institution. As for the Albany Movement, when Albany Police Chief Laurie Pritchett and his men were arresting 750 civil rights protestors, mostly local African Americans, in this dark corner of the Deep South the second week of December 1961, I was anxiously anticipating my 12th birthday in my native Massachusetts completely unaware of the unsettling developments in southwest Georgia.

Newly arrived in the Deep South in 1977, this student of the Early Republic and the Old South saw the modern civil rights movement as practically current events. And I was not far off the mark when you consider that as late as 1976 restrooms in the local courthouse were locked and only white employees had keys. Historians had only recently begun writing the history of the movement. Those writing in the 1970s and 1980s about the Albany Movement portrayed it as part of a bigger national story, often told in terms of the life of Martin Luther King, Jr. (e.g., biographies by David Levering Lewis, David J. Garrow, and Taylor Branch, and the PBS series Eyes on the Prize). As a result, Albany’s significance was shaped by the role it played in King’s career. The story begins just weeks before King’s arrival in Albany in December 1961 and ends with his departure at the end of the following summer.

This King-centric approach inevitably leads to a tale of failure. Albany remained as segregated in September 1962 as it was the previous fall. King himself admitted that he had failed in Albany, but the redeeming factor was that the lessons he learned in Albany led to success the following year in Birmingham. Once King leaves Albany in 1962, the southwest Georgia community disappears from the national accounts of the civil rights movement and we are left with the implication that the movement there failed. The problem with this approach is that the Albany Movement did not begin with King’s arrival in town and it did not end when he left. In the early 1990s a young British historian Michael Chalfen challenged the story of Albany as a failure by stretching its chronological limits back to the post World War I era and forward to the 1970s. In my new book, Looking Back, Moving Forward: The Southwest Georgia Freedom Struggle, 1814-2014, I take the origins of the movement back through Reconstruction to the resistance of enslaved African Americans before the Civil War. Similarly, I trace the continuation of the freedom struggle into the 21st century. Another British historian—Stephen G. N. Tuck—expanded the geographical limits of the Albany Movement to include much of southwest Georgia. Although Albany remains center stage in Looking Back, Moving Forward, it shares that stage with the rest of southwest Georgia, especially Lee, Terrell, Baker, and Sumter counties.

Expanding the chronological and geographical boundaries of the Albany Movement changes the story from one of failure in Albany in 1962 to one of a series of successes interspersed with setbacks that motivated more resistance to oppression. That resistance to white oppression had its beginnings in slavery in the form of silent sabotage and running away. By stealing themselves (i.e., their master’s property) and running for their freedom, these brave fugitives were the first southwest Georgia freedom fighters. When federal troops arrived in the region six weeks after Appomattox and declared the end of slavery, African Americans tested their freedom in many ways. Most important, they organized politically months before Radical Reconstruction insured black male suffrage. When African American men could vote, they turned out by the hundreds in places like Albany where they elected men of color to represent them in the state legislature as late as 1880.

During the Jim Crow era, African American men lost the vote and more than 120 of them were lynched in southwest Georgia. In the face of white terror, blacks continued to resist. Some boarded trains and headed north. Others organized divisions of Marcus Garvey’s UNIA in rural counties and NAACP branches in the larger towns. By the time SNCC operatives Charles Sherrod and Cordell Reagon showed up in Albany in fall 1961, students at Albany State College had already organized and demonstrated their resistance to Jim Crow. When Martin Luther King, Jr. arrived in December, he did not create a new movement, but joined a movement for which organized resistance was more than a century old. In the week before King arrived in Albany nearly 500 protestors had been arrested and jailed for challenging Jim Crow. Another 1,000 were arrested in the next 18 months.

While most historians have focused on King’s role in Albany in 1962, I argue that Sherrod and SNCC opened an equally important second front on the war against Jim Crow in the rural counties of Lee and Terrell that year. This rural front expanded to Sumter and Baker counties in 1963 and 1965 led by integrated teams of SNCC workers helping black citizens register to vote. Law officers beat the SNCC kids, night riders shot and wounded them and terrorists firebombed the churches they used in their voter registration efforts.

Despite the 1954 Brown decision and the 1965 Voting Rights Act, schools remained segregated and black voters found it impossible to elect African American city and county officials in at-large elections. It was only when local people of color went to court in county after county in southwest Georgia that they were able to bring the white power structure kicking and screaming into the modern world of equal rights and diversity. That struggle occupied that last third of the 20th century and continues into the new millennium. The ten-month involvement of Martin Luther King, Jr. in 1961-1962 was important, perhaps the apex of the Albany Movement, but its significance can be easily distorted if we forget that it was part of a much longer 200-year struggle that is ongoing in southwest Georgia.