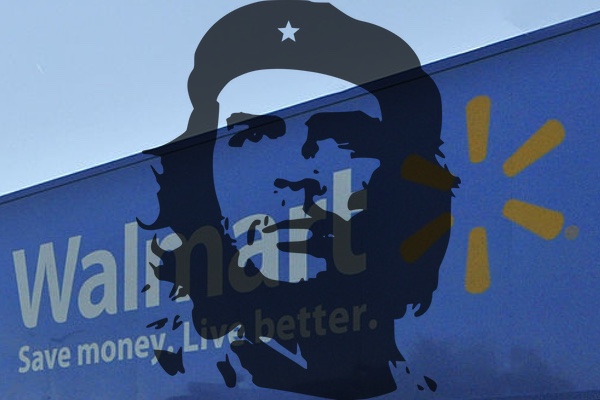 This week Wal-Mart announced they were yanking all items bearing the Confederate flag from their shelves.

"We never want to offend anyone with the products that we offer,” stressed Wal-Mart spokesman Brian Nick. "We have taken steps to remove all items promoting the confederate flag from our assortment -- whether in our stores or on our web site."

Wal-Mart’s decision, like Governor Nikki Haley’s to remove the Confederate flag from her State’s capitol, was obviously provoked by the recent Charleston “hate-crime.”

Over at Gateway Pundit Kristinn Taylor points out that on their web-site Wal-Mart merchants seventeen different posters and prints glorifying Che Guevara. So in case any Wal-Mart officials are perusing HNN today here’s a few items to consider regarding the selling or promotion of ““offensive” merchandise:

“The Negro is indolent and spends his money on frivolities and drink; the European is forward-looking, organized and intelligent…The Negro has maintained his racial purity by his well known habit of avoiding baths.”

"N**ger!" taunted my jailers between tortures,” recalled the world’s longest suffering black political prisoner to this writer. "We pulled you down from the trees and cut off your tail!" laughed my torturers. For months I was naked in a 6 x 4 foot cell. That's four feet high, so you couldn't stand. But I felt a great freedom inside myself. I refused to commit spiritual suicide.”

That wasn’t Nelson Mandela. No, the prisoner was a black Cuban named Eusebio Peñalver, whose incarceration and torture at the hands of the regime whose emblem Wal-Mart merchants in 17 different posters and prints stretched to 29 years, surpassing Nelson Mandela's record in time behind bars and probably quintupling the horrors suffered by Mandela during this period. In fact the emblem (Che Guevara) that Wal-Mart proudly merchants represents the regime that jailed and tortured the most and longest suffering black political prisoners in the history of the Western hemisphere—many more than were jailed for political offenses by Apartheid South Africa.

Many Cubans (many of them black) suffered longer and more horrible incarceration in Castro’s KGB-designed dungeons than Nelson Mandela spent in South Africa’s (relatively) comfortable prisons, which were open to inspection by the Red Cross. Castro has never allowed a Red Cross delegation anywhere near his real prisons. Now let’s see if you recognize some of the Cuban ex-prisoners and torture-victims:

No? None of these names ring a bell? And yet their suffering took place only 90 miles from U.S. shores in a locale absolutely lousy with international press bureaus and their intrepid “investigative reporters.” From CNN to NBC, from Reuters to the AP, from ABC to NPR to CBS, Castro welcomes all of these to “embed” and “report” from his fiefdom.

Wal-Mart shoppers and (and staff) should be informed that Che Guevara’s hate-obsession was actually the U.S. He murdered Cubans because of their supposed affiliation with the U.S. ("U.S.--Backed" Batista, the CIA, etc.) So as a public service to Wal-Mart shoppers of other than Cuban-American heritage, here’s more ravings from the racist, Stalinist mass-murderer who Wal-Mart promotes to the tune of 17 different products:

● “The U.S. is ‘a carnivorous animal feeding on the helpless!”

● “Against those hyenas there is no option but extermination!”

● “We must keep our hatred (against the U.S.) alive and fan it to paroxysm!”

● “The U.S. is the perpetrator of exploitation and oppression against all the peoples of the world!”

● “If the nuclear missiles had remained (in Cuba) we would have fired them against the heart of the U.S. including New York City. The vitory of socialism is well worth millions of atomic victims.”

(Thorough documentation for all of the above quotes can be found here.)

According to the Cuba Archive, the regime co-founded by Che Guevara – with firing squads, forced-labor camps, torture and drownings at sea – has caused an estimated 102,000 deaths, mostly Cuban of course. But whenever they could get their hands on an American “hyena” they really indulged. To wit:

When during the summer of 1960 Castro and Che’s gunmen stormed into almost 6,000 U.S. owned businesses and stole them at Soviet gunpoint, a few owners resisted. One of these was Howard Anderson who owned a filling station and Jeep dealership (not a casino or brothel, which were relatively rare in pre-Castro Cuba, by the way). I’ll quote from Anderson v. Republic of Cuba, No. 01-28628 (Miami-Dade Circuit Court, April 13, 2003). "In one final session of torture, Castro's agents drained Howard Anderson's body of blood before sending him to his death at the firing squad."

Castro and Che’s blood-lust against Americans was such that they sent their torturers thousands of miles to get their hands on (defenseless) ones. According to the book Honor Bound the tortures of U.S. POWs by Castro’s agents were “the worst sieges of torture any American withstood in Hanoi.”

Testimony during congressional hearings titled, "The Cuban Program; Torture of American Prisoners by Cuban Agents" held on November 1999 provide some of the harrowing details.

"The difference between the Vietnamese and "Fidel(the nickname for the Castroite torturer) was that once the Vietnamese got what they wanted they let up, at least for a while,” testified fellow POW Captain Ray Vohden USN. “Not so with the Cubans. Earl Cobeil had resisted 'Fidel' to the maximum. I heard the thud of the belt falling on Cobeil's body again and again, as Fidel screamed "you son of a beech! I will show you! Kneel down!--KNEEL DOWN!” The Cubans unmercifully beat a mentally defenseless, sick American naval pilot to death."

"Earl Cobeil was a complete physical disaster when we saw him," testified another fellow POW, Col. Jack Bomar. "He had been tortured for days and days and days. His hands were almost severed from the manacles. He had bamboo in his shins. All kinds of welts up and down all over; his face was bloody. Then 'Fidel' began to beat him with a fan belt.”

Alas, Wal-Mart officials, a corrective for all this “ignorance” does exist—and on your very shelves.