“WHITEWASH: UNSW rewrites the history books to state Cook ‘invaded' Australia” screamed the headline on the Sydney Daily Telegraph’s front page on March 30, going on inside to report: “Nutty professors want to Cook the record books.”

The history wars are alive and well in Australia it seems and the debate over whether the British “discovered”, “settled” or “invaded” Australia is as bitter as ever.

There are three things to be said about this “political-correctness-gone-mad” ruckus over a university’s guide to the use of language when dealing with Indigenous matters. First, this kind of “history wars” media beat-up has been going on for 20 years or so and – when it comes to these kinds of Indigenous issues – the Murdoch press has form. As it happens, The Daily Telegraph, originator of the current commotion is, a tabloid News Corp (Murdoch) organ. 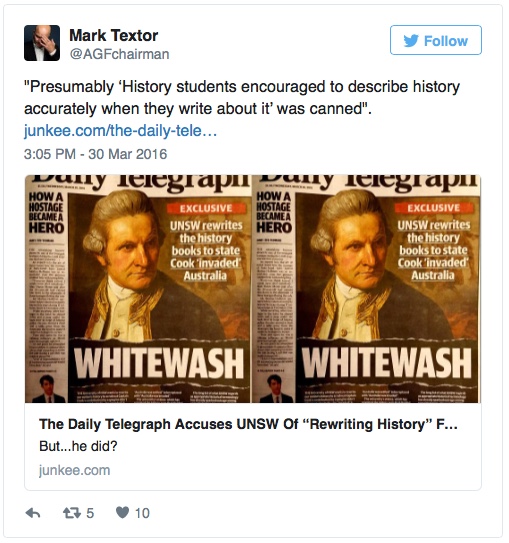 The second point to make is that the guide that has produced the screaming headlines in The Daily Telegraph is not what it is touted to be.

Third, Australia’s federal conservative coalition government, led by the urbane Malcolm Turnbull is foundering – and with an election due later this year, a conservatively-framed, shrieking, shock-jock fodder headline is a useful distraction from Tory woes.

By the way, the Australian Labor Party tends to avoid culture wars arguments, seeing them as a conservative distraction from the main game: social and educational improvement.

During the late 1960s, historian Henry Reynolds started to research the colonisation of Australia from an Indigenous perspective. He discovered that Britain’s foothold in Australia was accomplished by force with a great deal of brutality. Reynolds, a prolific author, started a whole school of historical research based on his findings.

At the same time, he made friends with Eddie Mabo, a gardener from the Torres Strait who worked at James Cook University where Reynolds was based. That friendship inspired Mabo to launch what turned out to be a lengthy legal bettle which culminated in a 1992 High Court decision granting Indigenous Australians land rights. Sadly, Mabo had died earlier that year, aged 55.

The landmark Mabo decision and the Reynolds view of the nation’s past infuriated some conservatives in Australia and in 1993 led eminent conservative historian Geoffrey Blainey to coin the term “Black Armband” to describe a exaggeratedly negative view of Australia’s modern origins.

This derogatory term was adopted by many prominent conservatives including the then prime minister, John Howard, and by the media – particularly by the Murdoch broadsheet flagship newspaper The Australian, run by neoconservative crusading editor Chris Mitchell between 2002 and 2015.

Australia’s version of the “History Wars” (a series of academic and media squabbles) mainly was based on a controversial, self-published 2002 book The Fabrication of Aboriginal History, written by conservative media lecturer, writer and controversialist Keith Windschuttle. The title suggests the theme, that progressive historians have fabricated the history of Indigenous Australians in sympathetic terms. The book’s premise was manna to the resentful right.

The consequence is that, since the early 2000s, the politics of Indigenous history have become a focus for dog-whistling by conservative individuals and groups. Their thesis is that left-wing humanities academics, who apparently dominate universities and schools, give undue, inappropriate and ideologically-motivated emphasis to the significance of Indigenous grievances over the benefits of European colonisation. Mixed in with that proposition are some nasty racist undertones.

It is important to understand that The Daily Telegraph, which published the latest shock, horror headline, is a Sydney newspaper and Sydney’s character is that of a brash, in-your-face, US-style metropolis (population 5.25m). It is home to rabid shock jocks and their press equivalent.

To keep up with the city’s scandal-hungry media mentality, The Daily Telegraph has to find or foment new moral panics or confected sensations on a regular basis, something it has a long track record of doing. Since the mid-1990s, The Daily Telegraph has blithely fended off a string of substantiated accusations of defamation, plagiarism, inaccuracy and offensive terminology.

It comes as no surprise to discover that the moral panic engendered by the Telegraph’s screaming “WHITEWASH” headline was caused by an updated and benign (if mildly debatable) 1996 Faculty of Education set of guidelines for primary teacher trainees on language issues that are sensitive for Indigenous Australians. Nowhere in the guidelines does it say that Captain Cook invaded Australia, or anywhere else. Nor does it say that the guide’s views on language and history are mandatory. Just see for yourself.

Given the travails of the Turnbull government, the Telegraph’s timing is also interesting. The University of New South Wales guidelines were originally published in 1996. Why all the fuss now? Must have been a reallyslow news day at the Tele.