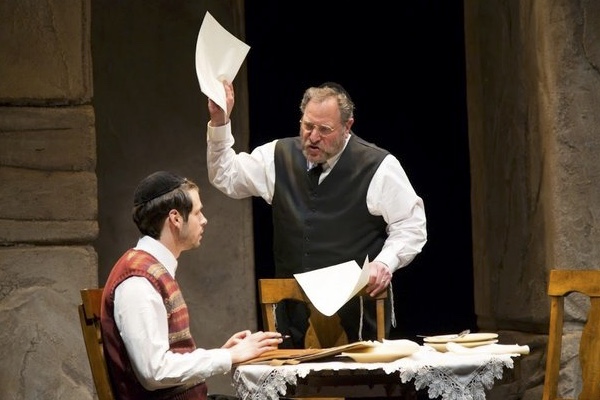 My Name is Asher Lev is the story of a young Hasidic Jewish artist from Brooklyn who is determined to become a potent force in a field of work in which Jews have rarely succeeded. His early claim to fame is a duo of crucifixion drawings and nudes that cause an immediate controversy. The paintings shock his strict Jewish parents but give aspiring artist Lev legitimacy in the art world. The play is about his struggles to succeed as a painter while at the same time sticking to his religion and honoring his faith. Can he do that? Is he using his talents instead of worshipping God or did God, in fact, give him his talents?

My Name is Asher Lev is a play by Aaron Posner that is based on the best-selling 1972 novel by Chaim Potok. It is ably directed by Jim Jack. The drama is now running at the George Street Playhouse in New Brunswick, N.J.

In the story, Lev’s parents, like most parents, are saddened and angry that their son wants to devote his life to art, which rarely pays much money, and to isolate himself from the large Hasidic community in Brooklyn. They are aghast at his drawings of naked women and his determination to succeed in such a business.

The story of Asher Lev and his battles between art and religion is a good one, but there are few plot twists in it and for long periods of time it drags by at a maddeningly slow pace. The show is saved by stellar performances by actors Bob Ari, Lena Kaminsky and Miles G. Jackson.

Ari plays Asher’s father, a hardworking Jew who labors for a large Jewish organization and is often away on business. He is the head of the family and Ari gives him depth and breadth of character and makes him very believable. Ari is just as effective as artists Jacob Kahn, who always carries a slight smile of approval of Asher’s work on his lips.

Kaminsky plays the mother, Anna Schaeffer and Rachel, a nude model. She is forceful as the traditional mother, proud of her son but wondering what will happen to him and always caught in the middle when her husband and son clash.

Jackson, a really gifted actor, plays Asher Lev (his voice is a dead ringer for that of actor Aaron Paul, co- star of the hit television series Breaking Bad). From the first moment you see him on stage until the very last, this is Jackson’s show. He gives a masterful performance as an observant Jew who must, just must, become an artist. He argues and always patches things up with his parents and is then taken under the wing of Jacob Kahn (an experienced painter). Through Lev, you learn a lot about the travails of all struggling artists, no matter what their religion, home state, or the year in which they live.

There are oddities about the play. The set is a collection of pillars that look like stone pillars. Other than a three-minute scene as an art gallery, they serve little purpose. There is little scenic movement in the play. The story takes place almost entirely in the Lev household in Brooklyn.

You do not learn a lot about New York or American history in the play. The movie Brooklyn was set in the 1950s, just like this play, but in the film you learned much about Brooklyn. You do, however, learn much here about the history of the art world in the 1950s and an enormous amount about the Jewish religion and the lives of the Hasidim in Brooklyn in the post World War II era. You just wish that Posner had put in more about both Brooklyn and Israel in that era, just after the Middle East state gained its independence and started 60 long years of disputes with its Arab neighbors.

The play is not great drama, but it is highlighted by dynamic performances by three superb actors and does involve a few nice personality clashes within the Jewish population of New York City in the 1950s.