Voltaire is the nom de plume of Philip Nobile, author of Catholic Nonsense and Intellectual Skywriting: Literary Politics and the New York Review of Books, and editor of Judgement at the Smithsonian. In 2001 Nobile accused Truman on war crimes in a special HNN edition:  Truman on Trial. 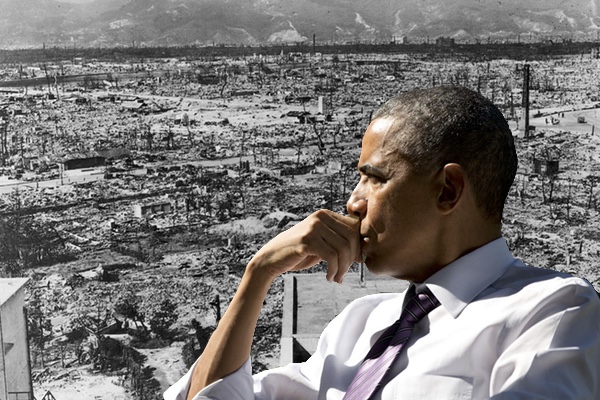 ● Bombing Hiroshima changed the world, but it didn't end WWII By Oliver Stone and Peter Kuznick

August 6, 1945—a date which will live in infamy, too.  That's when 20,000 children were massacred on this sacred ground in Hiroshima. We know that roughly 80,000 innocent civilians died here on that God-awful day. Probably, a quarter of them were just kids, teens, toddlers, babies, Hiroshima's beautiful young. Who in their hearts is not sorry for such a crime against humanity?

Let me say it—I am sorry all those kids were slaughtered in the name of the United States, "When you have to deal with the beast, you have to treat him as a beast." Those were the harsh words of President Harry Truman to the Federal Council of the Churches of Christ on August 10, the day after the hurried bloodbath in Nagasaki.

Nevertheless, President Truman seemed to feel that annihilating two undefended Japanese cities with poisonous terror bombs three months before the planned November 1 invasion and while Emperor Hirohito was desperately trying to negotiate a surrender was not part of God's plan. On the same day as his "beast" comment, the Commander in Chief's conscience pulled him back at a Cabinet meeting. Commerce Secretary Henry Wallace documented the turnabout in his diary: "Truman said he had given orders to stop atomic bombing. He said the thought of wiping out another 100,000 people was too horrible. He didn’t like the idea of killing, as he said, ‘all those kids.’ "

All those kids. The lucky ones were instantly vaporized on the 6th and 9th of August; so let us also remember the far less fortunate who suffered slow, agonizing deaths from radiation. Why do I mention today the young victims of Hiroshima and Nagasaki? For the same reason that President Truman lamented their hideous end: the purposeful slaying of thousands upon thousands of girls and boys innocent of Pearl Harbor, the Bataan Death March, and other crimes of war had no earthly justification.

To be frank, I had no intention to render an apology in Hiroshima today. Sincere contrition for great historical wrongs like the African slave trade, the Rape of Nanking, and the Final Solution, are always good things. Even so, some of my predecessors would do the Nukes of August all over again. "Not from this president," said a Republican. "There should be no apology requested, and that in my view is rank revisionism." A Democrat like me said: "Do I wish none of it happened? Of course I do. But that does not mean that President Truman in the moment of decision made the wrong decision. Or that the United Sates can now apologize for a decision that we did not believe, and I don't believe now, was the wrong one."

But something stuck in my mind as I was preparing for this visit, something that forced me to see in a new light what happened here 71 years ago. It was a remark by the late Israeli Prime Minister and Nobel Peace Laureate Shimon Peres at a Japanese Peace Ball ceremony at the United Nations in New York in 1994. He said there were "two holocausts—the Jewish holocaust and the Japanese holocaust. Because nuclear bombs are like flying holocausts." You don't have to accept an exact equivalence to appreciate Mr. Peres's point, which was—all atrocities are  alike—differing only in number and means of murder and disposal.  Were the skeletons in Auschwitz and Treblinka all that different from the skeletons in Hiroshima and Nagasaki?

Apologies come hard to kings, popes, and politicians who tend to bury bad information about themselves and their institutions. On the other side there is a moral imperative to dig up the facts and tell hard historical truths. We tried that in my country in 1995. The Smithsonian's Air and Space Museum mounted a giant exhibit to commemorate the 50th Anniversary of the end of World War II. The centerpiece was the polished fuselage of the Enola Gay, the B-29 that   dropped a 15 Kiloton uranium bomb on Hiroshima. Surrounding the plane were to be probing explanatory scripts researched and written by a team of the museum's curators. That's where the trouble began.

Inevitable questions were raised about President Truman's insistence on unconditional surrender, his resistance to a demonstration or leaflet warning, whether the experimental weapons were sped into combat more to impress the Soviets than prevent a costly invasion. The curators did not blame him for breaking Nuremberg rules against "the indiscriminate destruction of cities, towns, and villages, and devastation not justified by military necessity," concluding that: "Alternatives for ending the Pacific war other than invasion or the atomic bombing were available, but are more obvious in hindsight than they were at the time."

However, in the opinion of powerful veteran groups, any doubts about the rightness and necessity of the bombings were unpatriotic. The President, Speaker of the House, and the Chief Justice of the Supreme Court agreed. The script was banished and reflection crushed in un-American fashion.  And I'm sorry about that as well.

May God forgive the evil rained on Hiroshima and Nagasaki. An apology goes without saying, but I say it here and now. Thank you for listening. Never Again.