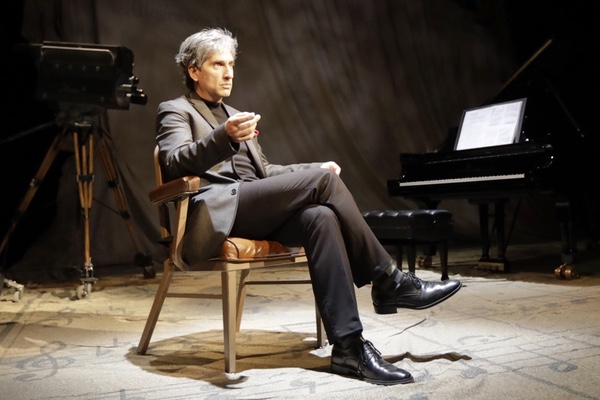 The thing that is truly staggering about the life of Leonard Bernstein, the composer of West Side Story, On the Town, Candide and other shows, the longtime conductor of the New York Philharmonic and television host, is what he did at such a young age. He was a composer in his teens, conducting the New York Philharmonic at 25 and Broadway veteran in his 30s. He was not some musical highly trained musical prodigee, just a kid from Massachusetts who learned how to play a hallway piano by himself and came from an immigrant, very non-musical family.

And yet he became a musical genius, an international superstar and the author of songs such as ‘Maria’ and ‘Tonight’ that people will hum forever.

All of that is there in an impressive new biographical one man show about him, Maestro that just opened at the 59E59 Theaters, on E. 59th Street, in New York. Silver haired actor Hershey Felder, star of several one-man plays, delivers a sterling performance as Bernstein and, again and again, showcases him as just an ordinary guy, just Lenny, who had this gargantuan talent.

Written by Felder and nicely directed by Joel Zwick, the play starts with Bernstein as a kid and takes you through his entire life, good and bad, well reviewed and critically panned, his loving marriage of 26 years (three children) to his wife and his many love affairs with other men. He does a superb job of portraying not just Bernstein at different points in his life, but the men who helped make him famous. He has many of the composers down pat, accents and all. He brings all of them to life in an entertaining show that tells you a lot about Bernstein. Felder also uses dozens of lovely black and white photos of the composer that are shown at the back of the stage. The pre-show period is filled with clips of the charming Bernstein on his television shows.

If you were a fan of the conductor already, you still learn a great deal. If you knew little about him, you get the Encyclopedia Britannica thrown at you. Either way, the show is a musical that celebrates his life and talent and also teaches you a lot about how Bernstein worked, the secrets to his success and, in the end, how he managed to stand on top of the heap of both classical and pop music – at the same time.

Felder stages the show nicely. He starts with the song Somewhere from West Side Story and then explains how Bernstein wrote it, borrowing from others and adding music of his own. Then he swings off the piano bench and starts the rather complicated story of the composer. He will move back to the piano for another song, or part of a concert, and then back to his story. Through this method he manages to tell the tale and, at the same time, play many of Bernstein’s songs. He tries very hard, too, as Bernstein repeatedly did, to make you understand that he was a great classical music composer and superb conductor as well as a famous Broadway composer.

Felder also spends a lot of time explaining how Bernstein desperately needed a wife and family and got them, and then lost them. There is much of Bernstein’s personal life in the show and a full discussion of his homosexual life.

The weakness of the show is that, particularly in the second half, there is too much classical music and too much time spent on composers you don’t really care about. There is also not enough on the celebrities, in and out of music, that became Bernstein’s friends. We get a lot of behind the scenes material on how he wrote music, but little on his friends and enemies, in show business. I knew a man who was a personal friend of Bernstein’s who claimed the solemn conductor was the funniest guy he ever met. The show needs more of that.

The play is also uneven. There is little on West Side Story and that is the single work for which he is remembered. You say Leonard Bernstein to anybody and right away they answer West Side Story. What was is like to work on that play? We get too little and we would like a lot.

In the end though, through a nearly two hour show of talk and lot of gorgeous music, Felder does a fine job. By the middle of the show, you really do believe that is Lenny Bernstein is up there talking to you and moving about with that well known smile and that famous swagger of his. It is a triumphant night in the theater, despite some flaws, and a much deserved celebration of a genuine musical genius.