Dr. Bruce W. Dearstyne is a historian in Albany, New York. His most recent book is The Spirit of New York: Defining Events in the Empire State's History.

Democrats are still reeling from Hillary Clinton's unexpected loss last November. Democratic leaders such as Senate Minority Leader Charles Schumer are leading the opposition to President Trump's proposals to overturn reforms such as the Affordable Healthcare Act. But history suggests that opposition to the president and vows of action to reconnect with alienated voters will not suffice. The Democrats will need new ideas, better alignment with the spirit of the times, and fresh new candidates to make a comeback and recapture the presidency. 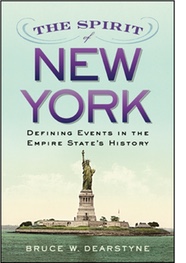 They can learn from the experience of their party in the 1950's. Their presidential candidate, Illinois Governor Adlai Stevenson, campaigned in 1952 mostly on a platform of continuing and expanding the programs of his Democratic predecessors, Franklin Roosevelt and Harry Truman. He lost to Dwight Eisenhower, a World War II hero who vaguely promised to uproot corruption in Washington and end the Korean War, ongoing since 1950. Republicans won majorities in both houses of Congress.

The Democrats came back, but it took eight years. They mainly followed five strategies.

1. Analyze reasons for the loss

Democrats need to examine frankly why they lost in 2016.

In 1952, Stevenson lost for two reasons. One, Eisenhower, a popular military hero because of his World War II leadership, ran convincingly against corruption in Washington and the threat of communist aggression and promised to end the war in Korea, which had begun two years earlier. It would have been very difficult for any Democrat to defeat him in 1952.

Two, more relevant for Democrats to recall today, Stevenson, governor of Illinois, came across as detached, waffling and indecisive. He was a reluctant candidate, not entering the race until just before the convention. He was eloquent and witty but bland, uninspiring, and inconsistent, something of a lukewarm liberal. He endorsed and promised to continue FDR's New Deal and Harry Truman's Fair Deal policies. But he also expressed disdain for federal programs on public housing, aid to education, and farm subsidies. He favored self-restraint, government frugality, and state action on economic issues. We should not "do in Washington what can be done in Indianapolis" or "ask Uncle Sam to bridge Catbird Creek," he insisted. He was a proponent of civil rights but skeptical of federal intervention and asserted the issue was a state responsibility. He said there was "no easy answer" to the Korean War. Stevenson's loss was due in part to not having clear, distinct, credible positions on key issues.

Democrats need a fresh set of ideas and policy proposals.

Early in 1953, John Kenneth Galbraith, an economics professor who had served as an advisor and speechwriter on Stevenson's 1952 campaign, wrote him with a suggestion. "How can we do the most to keep the Democratic Party intellectually alert and positive during these years in the wilderness?" Galbraith asked. "We have all told ourselves that mere opposition is not enough. Yet it would be hard at this moment to say what the Democratic Party is for. On domestic matters we are for good and against evil and for tidying up the unfinished business of the New Deal. We want an expanding economy but there are few who could be pressed into any great detail as to what this means or takes.... [W]e are still trading on the imagination and intellectual vigor of the Roosevelt era and that capital is running thin."

The answer, said Galbraith was "some organization in or adjacent to the Democratic Party" where political leaders and intellectuals could discuss issues and develop fresh new proposals.

Galbraith, with Stevenson's encouragement, assembled an informal group of thoughtful economists, political leaders, academics, and foreign policy experts. The group met every month or two for the next three years. It became known informally as the Finletter Group because it assembled frequently at the Washington home of Thomas K. Finletter, former Secretary of the Air Force. Stevenson attended occasionally. The group's discussions were lively and imaginative as they explored ways to draw on traditional New Deal/ Fair Deal policies but come up with fresh ideas that would take the Democratic Party to a new level and help it project a new, winning progressive image. They debated strategy, developed new ideas, and wrote substantive papers on national security, disarmament, taxation, social security, income distribution, agriculture, education, international trade, disarmament, and the U.S. role in Southeast Asia.

3. Use new ideas as a basis for the next campaign

Democrats need to bring their new ideas into the next presidential campaign; if possible, they need to try some of them out next year, in House and Senate elections.

The Democrats did a mediocre job of this in 1956. Their policies were more progressive than in 1952, but their candidate, once again Adlai Stevenson, did not capture the public's imagination.

Stevenson attacked the Eisenhower Administration for promoting complacency. He emphasized what would be required of the American people in the years ahead. His acceptance speech focused on the catchy theme "New America." Stevenson could be eloquent but too often came across as vague and idealistic, as he had in 1952. He believed that "the illumination of problems, needs, dangers and opportunities" should be at the center of any campaign and eschewed the sorts of forceful, energetic speeches that would have helped him grab the public's imagination.

But overall Stevenson's 1956 "New America" platform was a notable advance over 1952, with several forward-looking proposals, including:

● Federal aid to education, including college scholarships, fellowships and loans and expansion of vocational and adult education

● Federal support for old-age health insurance (a forerunner of Medicare)

● Funding for housing for the elderly

● New approaches to foreign policy, including a ban on testing hydrogen bombs

Eisenhower, still very popular, easily won reelection. But the Democratic Party had staked out new territory for itself and entered a new era, foreshadowing its comeback in 1960.

4. Focus on issues that matter to voters and show you can get things done

Democrats need to show that they are really in touch with people's concerns and will advance practical policies to address them.

Particularly in the Senate, Democrats in the 1950's focused on bread-and-butter issues that mattered to people, such as jobs, the minimum wage, labor rights, and trade. They often compromised with the popular president. Overall, they came across as concerned, constructive and statesmanlike.

Senator Lyndon B. Johnson, Minority Leader in the Senate from 1953 to 1955 and Majority Leader, 1955-1961, was the Democrats' most prominent leader and strategist in Congress. He used his exceptional political skills to stay on good terms with the president, appeal to both northern liberal Democrats and southern conservative Democrats, and work with Republicans where he could. Democrats should support "a program geared NOT just to opposing the majority but to serving America" he insisted when he took over as Minority Leader. When he became Majority Leader in 1955, he projected an image of action, getting things done, doing what was best for the nation rather than for his section of the country or his party. He favored compromise and worked out deals in his office, in the hallways, or in the Senate cloakroom. He abhorred long, divisive Senate debates. "It is the politician's task to pass legislation, not to sit around saying principled things," he said.

His biographer Robert Caro concluded that "Lyndon Johnson's Washington was a world in which deals could always be made, bargains could always be arranged, in which men were reasonable on compromising their principles."

Johnson, the consummate deal maker, brokered passage of a compromise civil rights bill put forward by Eisenhower in 1957. To northern liberal Democrats, he asserted he was a champion of civil rights. To southern conservatives, he argued that a compromise bill would ward off more stringent civil rights measures. To the country at large, Johnson came across as a statesman, master of the practical, someone who got important things done without ruffling feathers. That image rubbed off on his party.

Democrats face an issue similar to what they faced after Stevenson's second defeat in 1956: they need a jolt of rejuvenation.

Democratic national chairman Paul Butler in 1957 organized the Democratic Advisory Council (DAC) to sharpen Democratic Party positions in opposition to the Eisenhower administration and to stake out issues that would enable them to regain the presidency in 1960. Former president Harry Truman, Adlai Stevenson, and senators John F. Kennedy, Hubert Humphrey, and Stuart Symington – all but Truman contenders for the 1960 presidential election – joined.

The DAC drew on the work of the Finletter Group but went well beyond it. Its public position papers, which were issued under the sponsorship of the Democratic National Committee, got media attention. They advocated federal aid to education, a national health insurance program, a housing program for the elderly, urban renewal, a higher minimum wage, and a firm stand on civil rights. In the foreign policy area, DAC advocated tempering implacable opposition to communist aggression with attention to economic issues that were fostering totalitarism in developing nations.

Lyndon Johnson and his counterpart in the House, Speaker Sam Rayburn, sometimes clashed with the DAC; at one point, a meeting between Johnson and Butler turned into a shouting match. But Johnson gradually accommodated the Council's progressive views and ceded more power to Senate Democratic liberals identified with the DAC. Their issues, such as aid to education, urban renewal, and national health insurance, rose in prominence and were translated into official Democratic Party positions. The party's profile moved to the left. Many of the DAC's positions found their way into the 1960 Democratic Party platform.

6. Find a dynamic presidential candidate to give new ideas a popular appeal

The Democrats need to groom a fresh, new candidate to run for president.

Senator John F. Kennedy narrowly won the presidency in 1960, ushering in eight years of Democratic predominance and accomplishments, including civil rights and medical care programs. Unlike the other Democratic contenders for the presidency that year, Kennedy had youth, charisma and he was vigorous and dashing. He drew on his party's momentum – the ideas of the Finletter Group, Stevenson's elevation of a sense of national purpose, the track record of Johnson and others in showing the party cared about popular issues, and a sense of freshness and progressivism. But his campaign themes – we need to do more, we need to get the country moving – took the party to a new level and gave it new energy. The themes resonated with the changing public mood, which was becoming more attentive to the need for dedication and sacrifice and for new ways of using American power in the world.

His opponent, Republican Vice President Richard Nixon, seemed to embody what voters were then tiring of – the stale complacency and status quo of the 1950's. By 1960, people wanted something more.

Arthur Schlesinger, in his book A Thousand Days: John F. Kennedy in the White House, explained that: "The Democratic party had undergone a transformation in its eight years in the wilderness. In the last days of Truman, the party motto had been 'You never had it so good.' The essence of the party appeal was not to demand exertions but to promise benefits." By 1960, the public mood had shifted, and "the candidates for the Democratic nomination, and Kennedy most of all, were ... stressing peril, uncertainty, sacrifice, and purpose."

Kennedy appealed to the new public mood. "Recent history had washed away the easy consolations and the old formulas," Schlesinger wrote. "He voiced the new generation's longings – for fulfillment in experience, for the subordination of selfish impulses to higher ideals, for a link between the past and the future, for adventure and valor and honor."

Of course, few people would compare Donald Trump to Dwight Eisenhower, and the issues and tenor of the times are different today. But Democrats can return to national power again. To accomplish that, they need to learn from their own history, particularly the long comeback in the 1950's.