The Food for Peace Program: Ike Started It. Trump Wants to End It.

William Lambers is an author who partnered with the UN World Food Program on the book Ending World Hunger. He writes on Huffington Post, The Hill and many other news outlets. 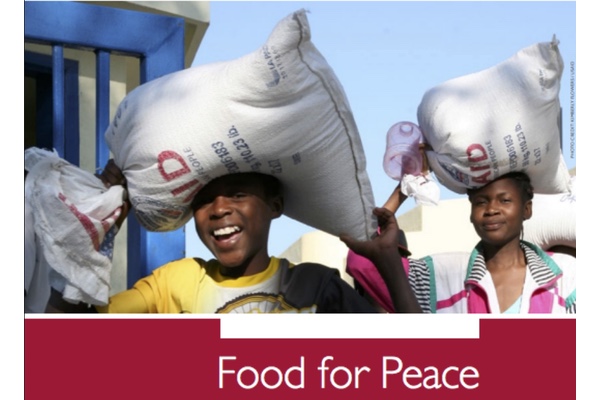 One of President Dwight Eisenhower's greatest achievements was starting the Food for Peace program, the United States main tool for fighting world hunger.

But now tragically President Trump has proposed elimination of Food for Peace, even in the midst of the worst hunger crisis since the World War II era.

There are 4 nations (South Sudan, Yemen, Somalia, Nigeria) at risk of famine with twenty million people facing starvation. A total of 45 nations need emergency food assistance according to the US Famine Warning System. These include Syria, Iraq, Afghanistan, and Haiti.

With this massive level of hunger, you would expect food aid budgets to increase. But Trump's budget drastically reduces U.S. international food aid, including ending Food for Peace.

Eisenhower took a vastly different approach when he became president, making food assistance a top priority, including emergency food aid for Berlin and a Christmas food package plan called Operation Reindeer. The creation of Food for Peace (aka Public Law 480), which sent U.S. surplus food worldwide to feed the hungry, followed in 1954.

Ike once wrote of Food for Peace: "My earnest hope is our people will put their hearts and minds into this effort. It is an effort that I consider in full keeping with American tradition-helping people in dire need who with us are devoted to upholding and advancing the cause of freedom."

Today Food for Peace supports the UN World Food Program, Catholic Relief Services, Save the Children and so many other organizations on the front line of fighting hunger.

This is why President Trump's proposal to eliminate Food for Peace and reduce the international food aid budget is ill advised. Instead the President should be asking Congress to increase the Food for Peace budget. America rises to the challenge when there is a hunger emergency.

The World Food Program USA is asking for at least 1.8 billion in FY18 for Food for Peace.

Catholic Relief Services (CRS) has been a Food for Peace partner since the beginning. As I write this they are providing relief in South Sudan. CRS brings food to those displaced by the conflict there. But they also work to rebuild agriculture, which is critical for South Sudan's future.

The largest donor for CRS and their life-saving work in South Sudan is Food for Peace.

Another war-torn nation is the Central African Republic. For this nation to recover children need food but also education. The UN World Food Programme (WFP), with the support of Food for Peace, has some innovative programs to bring school meals to children.

Local farmers, with WFP assistance, are producing food for school lunches in several areas including Paoua, Bouar and Bozoum.

The need is urgent, as WFP's Cathy Diop explains: "For many children, school meals are the only food that they eat during the day and one of my colleagues told me stories about some of these children who are coming to school with a plastic bag to be able to keep some of that meal for the rest of the family."

But with WFP school meals children can eat and they are able to learn again. With local farmers being the supplier it will benefit the entire community.

Nadia, a middle school student in the Central African Republic, says, "I come to school because it is fun to learn, and also because of the meals we get every day! It's only 11:00 am but I'm already counting down until lunch because the food is so tasty!"

It’s also offering hope in Nigeria and Cameroon, which are among the nations impacted by Boko Haram violence. Civilians have been displaced by the terrorist group.

WFP needs funding to provide emergency food aid to these war victims and the communities that host them. For small children in conflict and disaster zones, an enriched peanut paste called Plumpy'nut can save them from deadly malnutrition.

With Food for Peace support, Rhode Island based Edesia has been able to deliver 11,000 metric tons of Plumpy'nut and other foods to malnourished children.

But if the United States cuts food aid, what happens to programs for child war victims like this?

We can't back away from our leadership role in feeding the hungry. We should be increasing our international food aid to keep up with these hunger emergencies.

Feeding the hungry is essential to winning the peace. Eisenhower knew this. Trump and the Congress should too. We should increase funding for the Food for Peace program and international food aid.