The One Thing They Didn’t Teach You About the Mayflower

Tom Feiling is the author of The Island that Disappeared: The Lost History of the Mayflower’s Sister Ship and Its Rival Puritan Colony, published by Melville House on March 20th 2018. 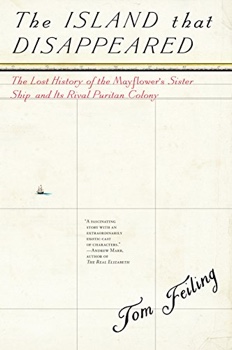 In two years’ time, Americans will commemorate the 400th anniversary of the arrival of the Mayflower at Plymouth Rock. This is where the creation myth of the United States begins: with a band of plucky English puritans whose hard work, plain living and faith in God supplied the foundations for a nation that would go on to become not only the most powerful on earth, but also the most democratic.

Mythology likes to keep things simple. It doesn’t appreciate historians drawing people’s attention to inconvenient facts that don’t fit the story. But a lot of effort has gone into deconstructing this creation myth, and today, most Americans appreciate that while the Massachusetts Bay colony was a democracy of sorts, it was also a theocracy. If you were a member of a church congregation, your voice would be heard. But freethinkers and Catholics got short thrift, as did most women, and the very idea that non-Europeans might have a right to a say in how the colony was run was seen as laughable.

But America’s creation myth omits another inconvenient truth. There was a sister ship to the Mayflower, which left England for the New World ten years after the Pilgrim Fathers. The passengers aboard the Seaflower founded a rival puritan colony on a seven-mile long speck of an island 150 miles off the coast of Nicaragua. The colony on the island of Providence is little known, probably because it only lasted for 11 years. But for a time, England’s most ambitious imperialists, who also happened to be among its most devout puritans, believed that the empire would rise not in New England, but on the Caribbean coast of Central America.

In 1635, Central America looked the more promising location. The Miskito coast was a verdant savannah, and the Providence Island Company thought it well suited to the cultivation of mulberry bushes and grapevines. Demand for silk and wine was strong in England, and the company was keen to meet it, instead of having to rely on imports from Catholic Europe. Providence was too small and mountainous to produce much in the way of commodities itself, but its sheltered harbour and the protective reef that ran down its eastern flank made it a natural fortress. It would serve as an ideal base from which to build the vast plantations that the company envisaged on the Miskito coast.

By comparison, New England held little promise. It exported a few hides, fish and timber, but nothing in much quantity, and it certainly wasn’t capable of producing the wine, silk, ginger, pepper, sugar and oranges that England’s wealthy aristocrats so enjoyed. The Providence Island Company’s shareholders included some of the richest men in England, and they also saw New Englanders as morally deficient. They regarded them as “loving friends,” as puritans liked to call one another, but also as cowards, who had taken refuge in the most God forsaken part of the New World. There wasn’t a lord among them, and without aristocratic leadership, no colony would ever amount to much.

The puritan grandees of the Providence Island Company believed that the Battle of Armageddon prophesised in the Bible was approaching. If Protestantism were to survive, it would have to take the fight to the enemy. That meant striking a mortal blow at the heart of Catholic Spain’s New World empire. From Providence, the company hoped to mount a military campaign that would sever Mexico from the South American colonies, thereby splitting the Spanish Empire in two and paving the way for the creation of an English-speaking, Protestant empire in Central America.

It was a harebrained scheme, but one that leads to an enticing “what if” question. What if the New Englanders had starved or frozen to death, or been wiped out by vengeful Native Americans, and the colony on Providence had survived? Would puritan democracy have taken root on the Miskito coast? Would Washington D.C. today be the name of a city in Central America?

It’s a fascinating idea, but it was never very likely. In 1635, England simply wasn’t strong enough to take on the Spanish Empire. King Charles I took little interest in colony building, at least not enough to send the navy to the Caribbean to defend Providence. Without state protection, the colony became dependent on privateers, both for the loot they brought back from their raids on the Spanish Main and for the defense they provided against a Spanish attack. For a time, these privateers – licensed pirates – terrorized the sea-lanes that ran between the ports of Spanish America.

The island’s puritans always opposed the turn to piracy, for it only made Spanish reprisals more likely. They had journeyed to Providence to build a New World utopia, where they could live like good Christians, free from the poverty, hypocrisy and tyranny that tainted life in England. But the island council was soon dominated by military men, who had no qualms about inviting every English ne’er-do-well with a taste for gold and glory to the island. For a time, the name of Providence was feared throughout the Caribbean, but in May 1641, a fleet of Spanish ships stormed the island and shipped the settlers – puritan and pirate alike – back to Cartagena in chains.

Even if the colony had survived the invasion, it would probably have collapsed under the weight of its internal contradictions. For any colony to survive, it needed goods to sell, some form of local, representative government, and an army to defend it from attack. Providence had none of that, which is why everyone has heard of Providence, Rhode Island, while practically nobody has heard of the little island of Providencia, Colombia.