I Wrote a Textbook. “Fox and Friends” Turned Me into a Villain.

James W. Fraser is a Professor of History and Education at New York University. He is the author of the textbook, By the People: A History of the United States. 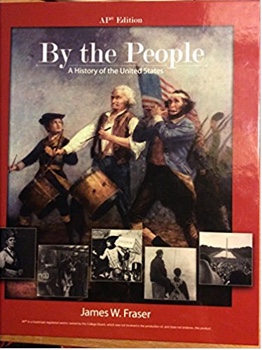 I suppose in their heart of hearts every historian secretly hopes that the national media will discover their work and they can get their day of national publicity.

The lesson of the last few weeks—for me—has been “be careful what you wish for.”

On Friday April 13, I received an email telling me that a high school student in Minnesota had seen the new edition of my high school textbook, By the People: A History of the United States, and tweeted that she believed the book was anti-Trump and hostile to Trump voters—and that conservative news sources were picking up her story. I did not think too much about it. Then on Monday morning April 17, Fox and Friends had a special report, “Anti-Trump textbook stirs controversy,” and declaring: “American history textbook ‘blatantly biased’ critics say.” Bill O’Reilly tweeted the accusation and an article appeared in theNational Review. I got more publicity than I ever contemplated.

I found all of this surprising. In my textbook I had gone out of my way to write a balanced account of the 2016 presidential election as I had done on issues throughout history. I reported what Hillary Clinton supporters said about Trump – which became the focus of the news attack. I also reported what Donald Trump supporters said about Clinton – which Fox and others ignored. I asked students to read multiple sources and think for themselves. If I had been writing a trade book or giving a public lecture I might have been more partisan. But as a teacher, and textbook author, I do not believe it is my role to teach my views.

I wrote By the Peopleto encourage students to think critically and consider multiple perspectives. I also wrote it to celebrate the rich diversity of the American people and to tell the experiences of as many different people as I could—conservatives as well as liberals, women as well as men, people of color as well as whites, and unknown people as well as the famous and powerful.

A decade ago 3 textbook companies printed nearly every schoolbook in use. All 3 were run by Soros Progressives. On 4-16 @foxandfriends a High School History book{James Fraser} "By The People" was revealed to slam Trump as unstable & his voters as haters & more. #ProgressiveTactic https://t.co/lI6LIIg5mY

Nevertheless, after Fox and Friends, Twitter users reported my email address and telephone number. I received over 100 emails and about a dozen telephone messages. A very few of the emails asked questions about the book. The vast majority simply said that I should never call myself an historian, or that I should do various anatomically impossible things to myself. Some suggested I die by various creative means. A thoughtful conversation about how best to teach American history it was not. For the most part, I was able to shrug it off, although there were moments when the deluge of hate got to me.

I was deeply grateful that within hours of the Fox broadcast my publisher, Pearson, issued a statement backing me and saying: “By the Peoplewas developed by an expert author and underwent rigorous peer review to ensure academic integrity.” Pearson executives called me to offer their support. Administrators and colleagues at New York University, where I teach, went out of their way to offer their support. And my family was wonderful. It was a reassuring development in an odd week.

When Fox interviewed the student who started the controversy she said, “I really believe that learning should be objective, and if the facts are skewed, then students aren’t able to make well-rounded decisions on what they believe.”I agree with her. That was, in fact, exactly what I tried to do in the book. But it was certainly not the story that Fox and Friends or other conservative outlets told.

As an historian I tried to do the same for Trump v. Clinton in 2016 as I did for Adams v. Jefferson in 1800. I also did the same for the many other controversies in our nation’s story. I never want to indoctrinate but to encourage students to listen to various arguments and views. I believe it is the role of a textbook, or a good teacher to do that. I know that I have colleagues who disagree and who believe a textbook should take a stand.  I want to encourage students to think for themselves, not learn my answers but rather ask hard questions, look at the facts, and make up their own minds.  Such informed thinking is critical to a vibrant democracy.

Keeping facts from students rightly makes them distrust all textbooks.  But history can never be merely a collection of facts. Such a history would be boring in the extreme—the “memorize names and dates” version of history that students rightly hate. I had to make decisions about what stories to include and exclude as every textbook writer must, and these decisions reflect my perspective. But I also worked hard to produce a book that laid out multiple perspectives as the best way to encourage a thoughtful engagement with history.

In reporting the 2016 election, I described it as an angry time for the nation. I wrote: “Trump’s supporters saw the vote as a victory for the people who, like themselves, had been forgotten in a fast-changing America—a mostly older, often rural or suburban, and overwhelmingly white group.” Demographic data and polling all support that conclusion. I doubt the president would disagree. I did not call anyone a racist and I would not—in a book or a class or a conversation.

I am deeply worried about the state of our democracy and our capacity within the United States in 2018 to talk to each other. In light of the last few weeks, I am even more worried. I worry we could be entering a time in which students in some districts will read pro-Trump books and students in other districts will read anti-Trump books. We need to find ways to talk to each other across deep and real divides, and listen to each other even if we will never agree, not retreat into separate corners. We won’t be able to do that if we begin with completely different versions of history rather than all looking at history in its full complexity.

As historians have a unique responsibility to help create a respectful, informed, and thoughtful community through our telling of the people of the nation’s story. We can do no less, even when we find ourselves in the glare of negative publicity for doing so.