Timothy Webster is an Associate Professor of Law at Case Western Reserve University. 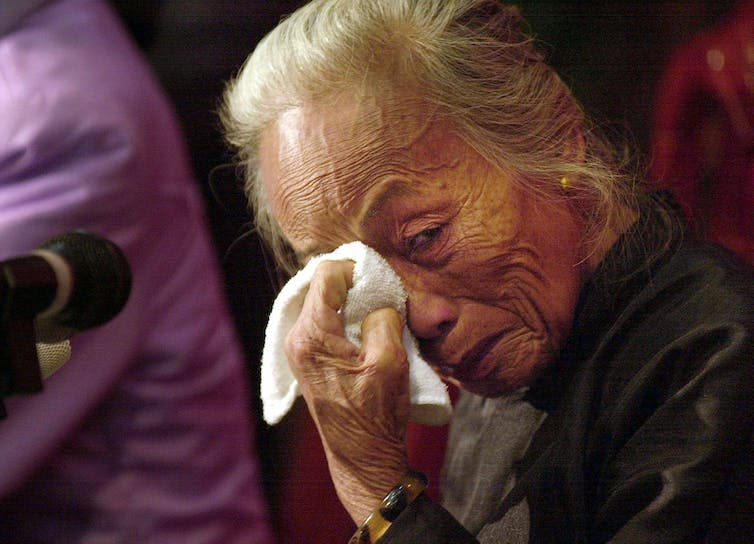 Chen Yabian, 74, of Hainan Province, southern China, testifies during the International Symposium on Chinese ‘Comfort Women’ in 2000 in Shanghai that she was 14 when Japanese Imperial Army soldiers forced her to work as a sex slave during the war. AP/Eugene Hoshiko

But the world has never stopped debating its legacy and how to make restitution for the damage done to the war’s victims. Consider some recent events.

In February, the Holocaust Deportation Claims Program, which compensates Jewish survivors of Nazi death camps transported on French trains, doubled its compensation payments, from US$200,000 to nearly $400,000. This makes it the most generous of any of the recent compensatory programs worked out by U.S. and European governments. This one is paid for by the French government, but administered by the U.S. State Department.

In March, a South Korean trial court ordered the seizure of property owned by the Mitsubishi Corporation in South Korea. Such efforts are apparently needed to enforce a November judgment by the South Korean Supreme Court, ordering Mitsubishi to pay $100,000 to each of five Koreans who performed forced labor during the war.

Whether the Koreans will ever see that money, or die before the forfeiture action is completed, remains up in the air.

These are among the latest manifestations of global efforts to review, revise, repair and remember the war – akin to the Nuremberg or Tokyo War Crimes Trials - but for the 21st century.

In the 1990s, a renewed interest in human rights, greater access to historical materials and a less polarized international political environment converged to spur reflection on World War II.

In the United States, civil lawsuits emerged as one tool, among many, to probe wartime human rights violations.

Plaintiffs sought wages for unpaid labor, return of looted art, restitution of bank accounts and other assets, and the restoration of their human dignity.

Two cases ended up in the United States Supreme Court. One, in which an elderly refugee mounted a lawsuit to recover family artwork seized by the Nazis, got a Hollywood ending. In “Woman in Gold,” Ryan Reynolds helps Helen Mirren sue Austria to recover a painting by Gustav Klimt.

Most cases did not follow the Hollywood script. Plaintiffs generally lost, either because the claims were too old or already resolved by postwar treaties. 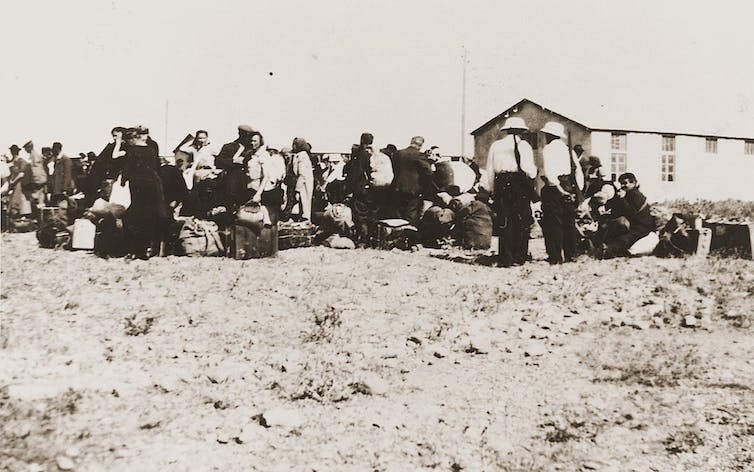 But that did not dispel the pressure from Jewish organizations or human rights activists to provide reparations.

Germany set up a $5 billion fund to compensate wartime forced laborers and slave laborers, and to support projects on history and human rights.

Later, the State Department set up additional programs, including the 2016 Holocaust Deportation Claims Program. The French government still runs the Commission for Reparations of Victims of Spoliation, established in 1999 to process claims about seized property and art.

In East Asia, survivors of World War II human rights abuses have had their day (decades, actually) in court.

Chinese victims of wartime medical experimentation, Korean forced laborers and Filipina “comfort women,” among others, have sued Japan and the Japanese government throughout the Asia-Pacific, including the United States.

But instead of using these lawsuits to reevaluate Japan’s role in World War II – as other programs did for European countries – the U.S. government has either absented itself from these discussions, or challenged the lawsuits on various grounds.

The moral leadership that yielded transatlantic solutions to war responsibility issues in Europe dissolved when the topic emerged in East Asia.

South Korea and Japan are America’s closest and most important allies in a region simmering with geopolitical tension, from trade wars with China to nuclear proliferation on the Korean peninsula. U.S. regional security interests hinge upon the successful coordination of relations among Japan, Korea and the United States.

As an international legal scholar with a background in Asian legal systems, international human rights and international economic law, I believe the United States ignores the Asian tensions over World War II at its peril.

The Obama administration understood this, and tried to persuade both Japan and South Korea to resolve their “difficult historical issues.” Chief among those issues is, of course, making reparations for injuries that Japan visited upon Koreans during the war: from the comfort women system to the forced mobilization of Korean laborers.

But the Trump administration seems unconcerned. It has exhibited indifference or hostility to human rights matters generally, refusing to respond to U.N. investigations about U.S. abuses along the Mexican border, and withdrawing from the U.N. Human Rights Council. Nor does the administration place much stock in international relations or diplomacy, with its attempts to starve the State Department of funding, and belatedly appointing an ambassador to South Korea.

In Asia, civil litigation has emerged as the key method to seek war reparations, though the track record is spotty.

Japanese courts have largely dismissed these suits, although a small handful of Japanese corporations decided to settle the cases and to pay modest amounts of compensation.

That state of affairs changed with recent decisions from the South Korean Supreme Court. The November judgment against Mitsubishi suggests compensation is still possible, at least in certain jurisdictions. Henceforth, Korean courts will almost certainly order other Japanese companies to pay compensation.

But even if plaintiffs win, they might still encounter difficulties enforcing the judgment. Losing Japanese companies may refuse to pay the Korean judgments, requiring Korean courts to seize Japanese assets located in South Korea.

Transforming the tragic past

The agreements reached in the 1990s and early 2000s by the United States with Germany, France, Switzerland and Austria to provide war reparations are not perfect, but each aspires to transform and repair a tragically forgotten past.

The United States’ failure to do the same in Asia perpetuates a pernicious double standard set after the war.

The United States has the experience, leverage and opportunity to resolve simmering animosities between its allies in Asia, as it did in Europe.

But does it have the ambition?