Donne Levy is a retired college instructor in US History, Asian History, and Western Civilization. 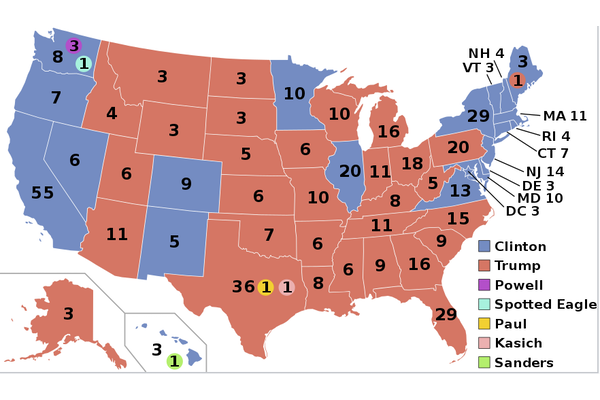 By any standard of measure, the 2018 midterm congressional elections created a blue wave that swept major regions of the country. With a record voter turnout for midterm elections, eight million more people cast ballots for Democrats than Republicans. That translated into a Democratic majority in the House of Representatives with a gain of 40 seats.

Attention now turns to 2020 and its presidential election. What happens in the next presidential election when a first-term president’s party is rejected by the American people? In the Post-World War II era, a president has won reelection after his party suffered significant losses in the midterms. Analyzing these instances may give us a clue as to whether a Trump second term is in our future.

Democrat Harry Truman was the first post-war president whose party suffered a major defeat in the midterms. Assuming the presidency less than three months after becoming vice-president, Truman faced a myriad of domestic problems stemming from the transition from World War II to a peace-time economy. Inflation and labor unrest including a nationwide railroad strike consumed the new presidency. The American people went to the polls in the 1946 midterms and resoundingly punished the party in power. The Democrats lost their majorities in both the Senate and House of Representatives dropping 10 and 54 seats respectively. Believing the election demonstrated the public wanted a Republican president, Arkansas Senator J. William Fulbright called on Truman to resign so that the new Speaker of the House Joe Martin would assume the presidency.

Truman did not take that advice and instead rose from political ashes to win in 1948 by reinforcing the government programs and policies that proved popular during FDR’s New Deal. In September 1945, Truman proposed his 21 Point Program including a minimum wage extension and increase, expanding public works, and strengthening unemployment compensation, housing subsidies, and farm price supports and subsidies. Truman later proposed universal healthcare. Although almost none of these proposals were law in 1948, Truman nonetheless made social welfare the cornerstone of his platform. In his acceptance speech in the Democratic Convention of 1948 Truman said, “Republicans approve of the American farmer, but they are willing to help him go broke. They stand four-square for the American home—but not for housing. They are strong for labor—but they are stronger for restricting labor's rights. They favor minimum wage—the smaller the minimum wage the better.” The promise of expanded government programs was popular with various segments of American society and Truman barnstormed the country and won a presidential term.

28 years later, Republicans experienced heavy losses in the 1974 midterm elections. Only three months earlier, Richard Nixon resigned in disgrace leaving the White House to his appointed vice-president Gerald Ford. When the American people went to the polls in November 1974, inflation was in the double-digits and—even worse—the seemingly honest, untainted President Ford pardoned his predecessor one month to the day after Nixon announced his resignation. The results were devastating:  the Republicans lost 48 seats in the House and 3 in the Senate.

Like pessimistic Democrats in 1946, some Republicans viewed the 1974 results as a warning that Gerald Ford should not be the party standard bearer in 1976. But Ford had a reputation for honesty and conservative principles and fought the Democratic controlled Congress as he vetoed 60 bills. Although unemployment was fairly high, inflation had dropped into single-digits by 1976 and Ford successfully repelled Ronald Reagan’s strong bid for the presidential nomination. After falling way behind his Democratic opponent Jimmy Carter, Ford nearly caught up and won 48 percent of the popular vote. A shift of a few thousand votes in Ohio and Mississippi would have given Ford a majority in the Electoral College.

Ronald Reagan also won reelection despite Republican losses in the preceding midterms. During the 1982 elections, the nation was in the worst recession since the Great Depression. With inflation declining but unemployment nearing 11 percent, the Republicans lost 26 House seats but broke even in the Senate and maintained a slim majority. In the next two years unemployment declined and inflation remained under control and Reagan’s massive tax cut seemed to be working. Reagan, remaining as likeable as ever to most Americans, easily won re-election in 1984.

More strikingly, the Democrats lost 54 seats in the House and 10 in the Senatein the 1994 midterms during President Bill Clinton’s first term. Republicans won a majority in the House for the first time in 40 years and eight years in the Senate. Anti-Democratic groups such as right-to-lifers, term-limit supporters, and the NRA got out the vote but the Democrats did not. Republicans began calling Clinton irrelevant and predicted his easy defeat in 1996.

A government shutdown likely aided Clinton’s reelection bid. In 1995, the Republican House of Representatives under Speaker Newt Gingrich proposed a U.S. budget that would limit what the federal government could do for the environment, education and many other areas. Worst of all for Republicans, the budget would have increased Medicare premiums. When Clinton vetoed the budget, a government shutdown occurred in 1995-96. By the time Congress reached an agreement, most Americans blamed the Republicans. Clinton ran for re-election by asking the voters, “Do you want the same people who would endanger your Medicare to also have the White House?” Furthermore Clinton won re-election by appearing mainstream or moderate by signing welfare reform and the Defense of Marriage Act. He expanded his base.

In the midterm elections during Barack Obama’s first term in 2010, the Democrats lost 63 seats and their majority in the House. Although Democrats narrowly maintained the majority in the Senate, they lost six seats. The Republicans mobilized the voters by claiming that Obama’s $831 billion stimulus package did nothing to end the recession and criticized “Obamacare,” the newly passed health care legislation.

By November 2012, unemployment had dropped two points and at least a million more Americans had obtained health insurance under Obamacare. Furthermore, the Republicans and their presidential nominee Mitt Romney played to a very conservative base without expanding it. The coalition of ethnic and racial minorities that helped elect Obama in 2008 had incentives to stay together and succeeded again.

The post-war history of midterm elections contains lessons for Trump and his campaign advisors. Presidents Truman, Reagan, Clinton, and Obama all saw their parties defeated badly in midterms in their first term, yet two years later the voters rewarded them with a second presidential term. President Ford came close to doing that too.

Given this history, what are Trump’s 2020 prospects? Truman succeeded by fighting against a “do-nothing” Congress and fighting for government programs popular with many Americans. But Trump’s border wall has gained no traction with the American people and many will likely blame him for the ongoing government shutdown. Reagan’s likeability coupled with a rebounding economy saved his presidency. Trump, however, remains strongly disliked by two thirds of the American people. Clinton moved toward the center attracting moderate voters who comprised a large segment of the electorate in a general election. Trump shows no sign of taking moderate or broader positions on any issue from immigration to healthcare. So while presidents have previously overcome midterm election losses, Trump isn’t following any of the previously established paths to rebound and win reelection.