The Ever-Present Billy the Kid: Protagonist of the Old West

Richard W. Etulain, Professor Emeritus of History at the University of New Mexico, is the author or editor of more than 50 books.  His two books on Billy the Kid are forthcoming. 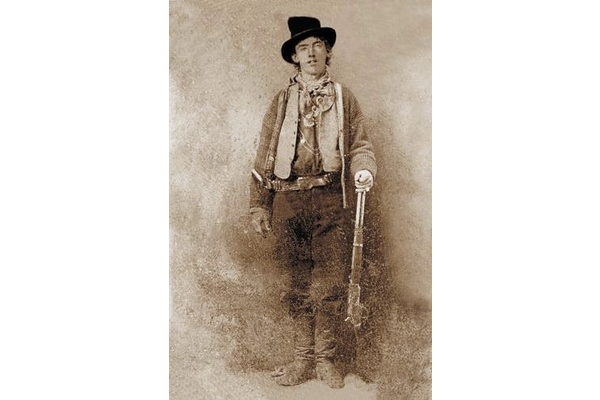 More than 1,000 books and essays have been published about Billy the Kid. He competes with Genl. George Custer and Jesse James as the most-written-about character of the Old West.

Why the Kid's enduring popularity? What has so fascinated readers and viewers with this desperado of the Southwest to keep him endlessly alive in biographies and histories, novels, and movies? Why should a wealthy businessman pay more than $2 million for the only authenticated, 2-by-2 inch photograph of Henry McCarty, Billy Bonney, or, as better known, Billy the Kid?

Several reasons repeatedly surface as explanations of the Kid's continuing popularity. Billy's youthfulness, his never-ending adventures still stir readers and viewers. His portrayal as an energetic outlaw in the best-selling biographies by Englishman Frederick Nolan and Robert Utley, the fiction of Ron Hansen, and the Pat Garrett and Billy the Kid and Young Guns movies keeps audiences enthralled.

Those who tout Billy also hold him up as a champion of the underdog. Much of New Mexico in the 1870s was in the hands of the political-economic overlords known as the Santa Fe Ring. Lawyer, politician, and businessman Thomas Catron, via off-and-on underhanded agreements with regional entrepreneurs and legal officials, controlled much of the territory's politics.  Working closely with The House  (a group of men, led by L. G. Murphy and Jimmy Dolan, that opposed those who backed Billy the Kid and his supporters), Catron and the Ring determined much of New Mexico's Lincoln County history in the late 1870s.

Billy's advocates frequently portray him as the most important opponent of these Ring and House interests in Lincoln County after his arrival in southeastern New Mexico in the early fall of 1877. Such writers as the prolific Gale Cooper describe Billy as a  modern-day Robin Hood, opposing the rich and powerful, supporting and leading the unfortunate and underlings.  Governors, territorial legislatures, county politicians, business moguls, and even military leaders at nearby forts--Billy opposed all these, as he continued to be an agent of justice and equality.

Billy is also depicted as a close friend of women. Spending his formative years with his loving, supportive mother Catherine, without a father, and overlooked by his stepfather William Antrim, Billy naturally gravitated toward warm relationships with adult, mothering women.  In Silver City, Clara Louisa Truesdell (the mother of Billy's buddy Chauncey Truesdell), Sara Knight (the older sister of another Kid friend Anthony Conner, Jr.), and teacher Mary P. Richards looked after Billy, especially after his mother died from tuberculosis in 1874.  Later in Fort Sumner, Billy was close with Luz Maxwell, matriarch of the influential Maxwell family.  The Kid's attractions to younger women such as Luz's daughter Paulita, Celsa Gutiérrez (a married woman), and Abrana Garcia (a common-law wife?) revealed his romantic interests. Conversely, Billy was unable to win over the strong support of Sue McSween, the most important woman in the town of Lincoln.

Several Hispanics forged friendships with and became supporters of the Kid.  In Silver City, where school-age Hispanics outnumbered Anglos nearly 7 to 1, Billy learned fluent Spanish. That fluency helped him to connect with Hispanics in the communities of Silver City, Lincoln, and Fort Sumner. Several Hispanics rode with Billy in their opposition to The House interests.  These included Yginio Salazar, Martin Chávez, and José Chávez y Chávez. Although not as close to the Kid as others, Juan Patrón, the Spanish-speaking leader in Lincoln County, sided with McSween, rancher John Tunstall, and the Kid coteries against Murphy and Dolan.  Once Billy broke out of the Lincoln jail in spring 1881, Hispanic herders and townspeople hid him away, protecting him from Pat Garrett and other pursuers.

Still others salute Billy for his comradeship and leadership. He rode with the pack, first as a follower in 1877-1878 and then as a chief from 1879 to 1881. As George Coe, Billy's early acquaintance and chum in Lincoln County noted, everywhere Billy went he "was the center of interest." "Because of his humorous and pleasing personality," Coe added, the Kid "grew to be a community favorite."  George's cousin Frank Coe described the Kid as "naturally full of fun and jollity," as "gentlemanly as a college-bred youth." Even as a follower, Billy spoke out forcefully.  For example, he urged his companions to chase down and eradicate those who murdered Tunstall in February 1878. And during the horrendous burning of the McSween house on the Big Kill day of 19 July 1878, Billy took over the commander's role from the faltering Alex McSween and engineered an escape that saved his and others' lives. Soon thereafter, Billy took over direction of the Regulators, the Lincoln County riders who violently confronted The House and Santa Fe Ring dictators, and led that counter group for the next two to three years.

Even more important than Billy's youthful vibrancy and adventuresome spirit, his warm connections with women and Hispanics, and his comradeship and leadership in sustaining his ongoing popularity is another ingredient. Those who love the Kid have enormous difficulty embracing his darker sides. They want to whitewash his character.  But when still in his mid-teens, Billy became a thief, actions that expanded into his major occupation in the closing years of his life. Worse, the Kid was a murderer, killing at least four men on his own and involved in group killings of as many as a half-dozen others. Nor was Billy a moral giant.  The best evidence suggests he became intimate with married women. Finally, when opposed, when pushed into a corner, or bested in competitions, Billy frequently resorted, spur of the moment, to his guns and other violence. If these desperado sides of Billy's character are forgotten or erased, he remains an upright and admirable hero for his aficionados.

Interest in the Kid remains uniformly high, but the predominant images of him in the past half century in histories, biographies, novels, and films have notably shifted. If many of the first pictures of the Kid portrayed him as a villain and if later depictions were more upbeat and even heroic, beginning in the 1970s and 1980s, a new, more divided Billy appeared on the scene. Neither entirely a desperado or hero, he was parts of both. He was becoming a Grey Hat of the American West, a Dr. Jekyll and Mr. Hyde embodying competing repugnant and admirable sides. It was this new, complex Billy who rode through the pages of Frederick Nolan and Robert Utley's recent histories and biographies, the fiction of Ron Hansen, and the Young Guns movies.

Roughly a generation into the twenty-first century, Billy the Kid still rides--at or near the front of all the popular Old West demigods.  But he now wears a new, more shadowy face, a blend of rascality and the honorable. Thankfully, this recent bifurcated Billy gallops closer to the truth.