The Civil War and the Black West

William Loren Katz is the author of Black Indians: A Hidden Heritage and 40 other books on African American history including The Black West: A Documentary and Pictoral History of the African American Role in the Westward Expansion of the United States. A new edition will be out later this year. 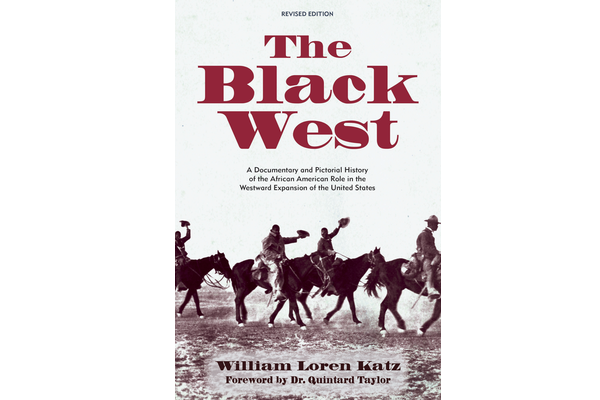 In 1861, as Confederate armies prepared to crush the Union, President Lincoln commanded only 13,000 men and officers. At this moment ragged immigrant invaders seeking asylum reached the southern border of Kansas.

Surrounded in Oklahoma on three sides by slaveholding states, they found themselves defenseless when the President withdrew Federal troops from the Indian Territory for service back east. Confederate diplomat Albert Pike and his armies arrived to take over. People of color and some poor white Oklahomans said they wanted no more of white men’s wars or slavery. Voting with their feet for neutrality and emancipation, a ragged band of 10,000 revolutionaries picked up and fled.

Strongly supporting this revolution from within most Indigenous Nations, was the Keetowah or PINS, a secret anti-slavery network of enslaved and free Africans and Indigenous Americans.

Opothla Yahola, a wealthy Creek chief, who favored neutrality agreed to open his 2000-acre North Fork stock raising and grain plantation to the refugees. Yahola had fought slaveholder armies in two Seminole wars and a voice for his people’s traditional values. As the exodus settled in North Fork, he freed his slaves. Soon one in seven residents of Oklahoma lived on his plantation. It began to look a refugee camp and sound like a community meeting.

At Round Mountain November 19, 1861 neutrals using bows and arrows and a few rifles drove Cooper’s Army back to Fort Gibson. On December 7th while their white officers were away, conscripted Indian Confederates visited Yahola’s camp. What began with warm greetings ended the next morning with most of Indigenous Confederate recruits leaving for home and some joining the marchers.

Winter’s savage wind and snow, one of the worst in years, began to sweep though Oklahoma. At Chustenahlah the day after Christmas, Confederate troops opened fire on marchers. Hundreds were slain. Cattle, ponies and sheep died and survivors fled leaving their wounded, food, supplies and dead in the snow. One Seminole chief recalled: “At that battle we lost everything we possessed: everything to take care of our women and children with, and all that we had.”

The neutrals now determined to reach Union lines in Kansas. They walked into a “march of blood on ice.” In early 1862 about 7600 ragged, wounded and traumatized men, women and children straggled into southern Kansas. It had few relief facilities to offer, only cold, hard ground. Yahola had lost his daughter in the march, and he died soon after in a small tent.

Devastating attacks and staggering losses changed many survivors. Young male neutrals now wanted to fight planters and free slaves. Their commitment to anti-slavery came months before Lincoln thought of Emancipation, and long before emancipation opened recruiting in the deep South. News ofthis new liberation army drew runaways from Arkansas, Missouri, Kentucky and Tennessee to Kansas and enlistment. By 1865 the state’s Black population had swelled to 12,527.

The anti-slavery enlistees in Kansas luckily stumbled on a group of abolitionist officers who eagerly embraced their ideals and eager to train them. Some officers had arrived or rode with John Brown in “Bleeding Kansas” in the 1850s. Now they had the chance to lead the multicultural Army Brown always wanted.

Another of history’s wild straws appeared when President Lincoln asked General James Lane to command his Kansas recruiting. Lane had been a committed racist who believed “Africans were a connecting link between human and orangutan.” As an Iowa Senator and General during the Mexican war, he helped the U.S. seize Mexican land from the Mississippi to the Pacific for U.S. slaveholders.

A man of recurring changes, in 1856 Lane rode into “Bleeding Kansas” to serve John Brown’s raiders. In January 1861 Lane was made president of the Topeka Free Soil Convention that wrote its anti-slavery Constitution. Kansas appointed Lane one of its first two U.S. Senators.

As President-elect Lincoln prepared for his inauguration amid rumors of assassination plots, Lane met him in Washington. Lane agreed to recruit 116 armed Kansans to guard the White House. For twenty days his men camped in the east room and Lane slept outside the President’s bedroom. Lane, anchored only by his ambitions, was Lincoln’s choice for Commander of Kansas recruiting.

“ . . . we need the services of such a man out there [in Kansas] at once --that we better appoint him a brigadier-general of volunteers today, and send him off with such authority to raise a force . . . [and] get him into actual work quickest.”

Fierce, grim-faced governed by a ruthless fighting code and given to explosive announcements, Lane was both the President’s Kansas Commander and a powerful military figure in the Trans-Mississippi West. He soon won the support of his officers and men, became a popular hero and a man women feared.

In the Summer of 1861 Lane led the Ist Regiment Kansas Volunteer Cavalry, the first ex-slave soldiers of the war. With thirty men he invaded Missouri and defeated 130 mounted Confederate guerrillas. He then called his men “the finest specimens of manhood I have ever gazed upon.”

In July 1862 General Blunt was authorized by Lane to recruit any men in Kansas “willing to fight.” Under him Abolitionists Colonel William Phillips, one of Brown’s two brigade commanders, and Captain Richard J. Hinton, Brown’s admiring biographer, also led raids into slave territory. The President’s Kansas operation was now directly defying the President’s War Department policies. Meanwhile their soldiers of color rolled up one victory after another.

The invasions of Missouri continued to fill ranks of Kansas soldiers of color and as did runaways fleeing slave states. The appearance of armed Black men stirred escape plots and disrupted plantations months before President Lincoln embraced Emancipation.

Between 1860 and 1863 Missouri’s enslaved population fell from 114 000 to 78,000. Runaways increased in Iowa, Illinois as well as Kansas. Masters seeking to avoid advancing Black troops began to force march enslaved families to Arkansas and Texas.

In the “Indian Home Guards” and “Indian Brigades” Lane found the Black Indian members served as interpreters between their Indigenous brothers and the white officers.

On July 17, 1863 Blunt’s multicultural army of 3,000 at Honey Springs fought the largest battle of the Indian Territory. White Confederate soldiers expecting the appearance of armed whites frighten Blacks to surrender, so they arrived with 300-400 pairs of handcuffs.

Instead, the Confederates found the revolutionaries routed their cavalrymen, guerilla units and 6,000 Missouri State Guards. The New York Times described the “desperate bravery” of the outnumbered African American force. A white officer reported, “they fought like tigers.” Six Killer, a Black Cherokee, shot two Confederates, bayoneted another and clubbed fourth with his rifle butt. Sgt. Edward Lowry, ordered to surrender by three mounted Confederates, knocked all three from their horses.

From trans-Mississippi battlefields Union Generals and northern journalists continued to report the “extraordinary courage under fire” of these units of color. Emancipation still lay in the future.

Clearly soldiers of color were fighting for something more fiercely personal than saving the Union. So were Lane and his white officers. They repeatedly petitioned the War Department to pay their men the same $13 a month granted whiterecruits. They also urged their men be commission as officers. Col. James Montgomery’s “tri-colored brigade” -- Indians, whites and ex-slaves -- fought for nine months without any wages as a protest. But wage equality had to wait until after the Emancipation Proclamation and slave recruitment.

On Emancipation Day January 1, 1863 Lane’s men and officers held their own liberation celebration. Lincoln’s policy now marched in step with their fight against the rebels. In a richly symbolic ceremony Lane’s multicultural Army honored their victories, the people they liberated and saluted their hero, John Brown. Wives and children cheered their courage and rescue of enslaved families. Blunt’s men sang the John Brown song, and added a final line -- “John Brown sowed, and the harvesters are we.” Men and officers, Blunt wrote, then shared a barbecue and “strong drink.”

The President Lincoln early called for 75,000 volunteers to serve for three months. Neither he nor 31 million other Americans expected a four-year carnage that would take 750,000 lives and leave no family in the north and south, white or people of color, untouched.

Lincoln’s early policies had drawn fire from Frederick Douglass and fellow abolitionists. They claimed he invited defeat and encouraged treachery. Douglass called for a “people’s revolution” one that would arm the enslaved and overthrow the planters’ system. The Kansas volunteers of color and their white officers were the first to recruit, arm and trains men who would turn that about on the battlefield.

Lincoln’s mass recruitment of former slaves and free men of color arrived was pivotal. Both sides were running out of reserves. Enslaved families had brought in the food for southern citizens and soldiers and picked the cotton to sell abroad. But now many were runaways. Confederate desertions rose and their cities faced food riots.

Emancipation also brought Frederick Douglass and abolitionists back as Lincoln’srecruiters. 180,000 Black men served in 150 regiments before the war ended. Some served as spies. Men and women labored in Union Army camps. With less training, fewer medical officers and facilities, recruits of color left 37,000 comrades dead on the battlefield.

In August 1864 Lincoln admitted that without his Black troops “we would be compelled to abandon the war in three weeks.” He had first doubted Black men would dare fight against their former masters. Confederate General Howell Cobb now admitted, “If slaves make good soldiers our whole theory of slavery is wrong.” In November 1864 the battlefield victories of African American troops gave President Lincoln a second term in the White House.

These three men used their new authority to investigate the treatment of soldiers of color. Commander Lane, they discovered, threatened or ordered men beaten and starved to force enlistments. On August 3, 1862 Lane threatened a thousand Black men to join the First Kansas Colored Infantry Regiment shouting, “If you won’t” fight, “we will make you.” His Black officers halted this illegal practice.

Next the threefound Lane had Black soldiers too traumatized to fight or fire guns arrested for “shirking official duty.” White soldiers suffering similar problems were discharged to their families. Matthews, Minor and Douglass eventually won Black men the right to return to their families.

THE END OF THE WAR

In 1865 Commander Lane, a Kansas hero, decided rejoin the racist opposition. The Kansas Legislature still chose Lane their Senator. The General had one more shot to fire –he took his own life. Kansans named Lane University in his honor.

The Trans-Mississippi revolution in Oklahoma became a liberation Army in Kansas.  This kind of American Army did not reappear until the 1950s during the Korean War.