A Boss is a Boss: Nurses Battle for Their First Union Contract at Albany Medical Center

Dr. Lawrence Wittner (https://www.lawrenceswittner.com/) is Professor of History Emeritus at SUNY/Albany and the author of Confronting the Bomb(Stanford University Press). 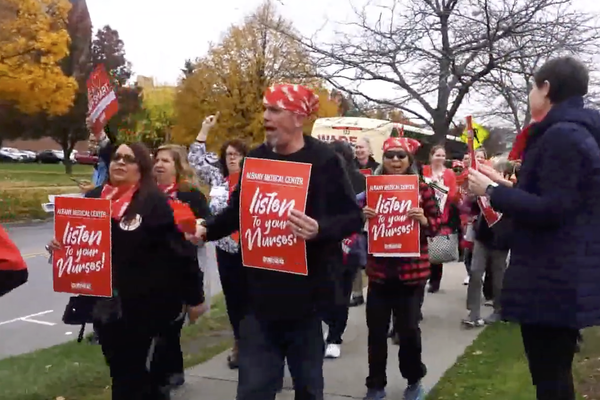 A nonprofit employer is not necessarily a better boss than a profit-making one.

That sad truth is reinforced by the experience of some 2,200 nurses at Albany Medical Center, who have been fighting for a contract since April 2018, when they voted for union representation.

Even that union recognition struggle proved exceptionally difficult.  The management at Albany Med―a vast, sprawling enterprise with roughly $2 billion in revenue and 9,500 workers, making it the New York capital district’s largest private employer―fought vigorously to prevent unionization.  As a result, three union organizing campaigns conducted between 2000 and 2003 were defeated by very narrow margins.

But worker discontent grew over subsequent years.  In April 2009, Albany Med informed workers that it was eliminating scheduled raises, freezing hiring, cutting vacant positions, and reducing employee time off.  This announcement followed a year in which James Barba, the hospital’s president and CEO, received $4.4 million in total compensation.  In 2011, Albany Med―hit with a federal class-action lawsuit charging that its officials had conspired with their counterparts at other area hospitals to keep down the pay of registered nurses―grudgingly agreed to settle its share by providing the aggrieved nurses with $4.5 million.  Moreover, nurses complained of short-staffing, computerized duties that left them with less time for their patients, and low salaries.

Against this backdrop, the New York State Nurses Association (NYSNA) began waging another union organizing drive in 2015.  As the campaign gathered momentum and a union representation election loomed, management resistance grew ever fiercer.  Nurses reported receiving daily emails from administrators discouraging them from voting union, managers pulled nurses aside for on-on-one meetings to question them about how they would vote, pro-union flyers were torn from bulletin boards, and Filipino nurses on work visas were warned that unionizing could jeopardize their immigration status.  The situation became such a scandal that, in March 2018, Governor Andrew Cuomo ordered the state Labor Department to investigate complaints of intimidation, threats, and coercion by the Albany Med administration.

Finally, in April 2018, with 1,743 nurses casting ballots in a government-supervised representation election, the pro-union forces emerged victorious by a two-to-one ratio.

Nevertheless, rather than accept defeat and engage in good-faith collective bargaining, the Albany Med management has adopted a well-established corporate tactic for undermining a fledgling union:  denying it a first contract.  Thus, more than a year-and-a-half since contract talks began, they appear stalled. NYSNA has not been able to resolve the major issues of concern to the nurses at Albany Med and, as a result, has been unable to deliver on its promises.  Seizing the opportunity, anti-union employees, reportedly with the assistance of management at Albany Med, have begun a petition campaign to decertify the union.

The primary issue for the nurses remains adequate staffing. According to Albany Med’s management, the hospital is short almost 200 nurses, a vacancy rate of about 10 percent.  From the standpoint of the nursing staff, this is appalling, both because they are being overworked and because their patients are receiving inadequate care.  “You’re afraid to end your shift and go home because there’s just not enough nurses to go around,” declared Kathryn Dupuis, a nurse employed there for 24 years.  As a result, she often works overtime. “Bottom line is it’s my conscience. I got into this to help people.”

Other issues are important to the nurses, as well.  According to union activists, nursing salaries at Albany Med are lower than at other upstate New York hospitals, while the health insurance plans available to hospital employees are very expensive.  Naturally, these conditions interact with the problem of maintaining adequate staffing at Albany Med.  “It’s a really great place to work,” one RN remarked at a public forum.  “But when you have a family and you have to pay a lot for health insurance or your wages barely cover your mortgage, it’s just easier to go someplace else with competitive wages and benefits.”

Yet another issue involves Albany Med’s use of Filipino nurses for what the union charges is “forced labor.”  This October, NYSNA filed a federal lawsuit alleging that the hospital was violating the labor provisions of the Trafficking Victims Protection Act. The lawsuit focused on an Albany Med program, begun in 2002, that recruited nearly 600 nurses from the Philippines.  These nurses, the lawsuit noted, were required to sign a contract including clauses providing for a penalty of up to $20,000 if the recruited nurse resigned before a three year period ended.  The lawsuit contends that the contract included a threat that, if a nurse breached the contract, the hospital “would report the nurse to federal immigration authority, which could result in deportation proceedings.”

Albany Med can also bring considerable pressure to bear on the City of Albany.  As a nonprofit enterprise, Albany Med is tax-exempt, as are other major nonprofit institutions in the city.  This means that only 36 percent of the value of Albany real estate is taxable, a situation limiting the revenue available to fund the city’s operations and resulting in considerably higher taxes for the city’s homeowners.  As the nonprofits, with their thousands of employees, are major users of city services, the city administration pressed them to make voluntary payments in lieu of taxes.  Albany Med initially agreed to pony up $500,000 per year―a pittance for this enormous enterprise, but badly-needed revenue for the city.  Even so, Albany Med failed to make this payment in 2017, and skipped it again in 2018.  The inconsistent nature of these payments has left the City of Albany a perennial supplicant to the giant medical complex. It might also explain why, just this year, the city administration named a downtown street after James Barba, Albany Med’s CEO and president.

Albany Med is quite capable of providing safe staffing, decent wages, affordable health insurance, a less punitive approach to immigrant labor, and regular payments to the City of Albany.  After all, it is a very wealthy enterprise―in its own words, “a vast organization” that, in addition to its extensive New Scotland Avenue hospital complex, has more than 100 locations throughout the region, including affiliations with other hospitals as well as a network of urgent care and multi-specialty centers.  In recent years, Albany Med has spent hundreds of millions of dollars on an enormous building and expansion program and, consequently, now owns a considerable portion of downtown Albany.

As a result, although Albany Med seems determined to continue its traditional anti-union policy, NYSNA will be waging a heightened campaign to secure the first union contract for the medical center’s aggrieved nurses.